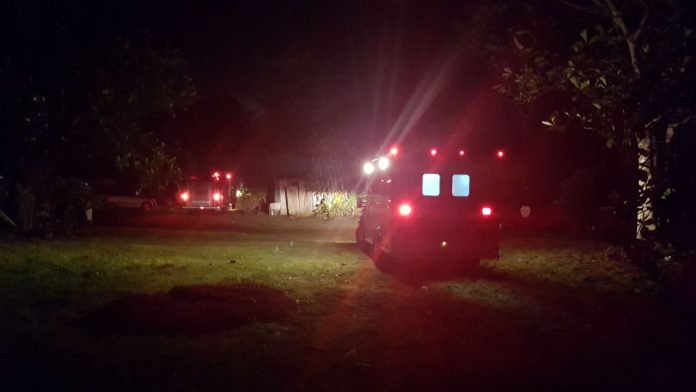 “We came home, but our owner was blocking the road.”

Guam – A case of suspected arson that left a family homeless in the rain on the Fourth of July remains under investigation this evening. Today Guam Fire Department spokesman Kevin Reilly texted Pacific News Center that he’s still “waiting for [a] reply from investigators” in their search for clues that led to the inferno that destroyed a large family’s wood and tin home.

Trucks were reportedly dispatched to the scene of the blaze just before eight o’clock Tuesday night. Photos supplied by GFD show firefighters hosing down the flames in a smoky haze. No one was hurt.

Wednesday morning the whole home lay in ruins in the drizzling rain, a mass of black ashes and charred wood, twisted shingles of corrugated tin, melted plastic water casks, burned palettes, clothing, and cookware. It was a tragedy that left Papinory Papino’s family without food, clothing, or shelter.

Papino is the patriarch of a family of eight that includes members ranging in age from 57 to one year old. His wife, Kasinta Chiro, said they are from Chuuk and have no other relatives on Guam.

The family was visiting neighbors just a hundred feet down a dirt road when they noticed their house on fire.

“At 6:00 p.m., we came home, but our owner was blocking the road,” 10-year-old Fergeuel Papino said. But the young son of Papinory and Kasinta said he didn’t know how the fire started.

The near two-hour gap between the time the family said they first noticed the fire at six o’clock and the time GFD said fire trucks were sent near eight is unclear. PNC gathered unverified reports from two sources that there may have been a landlord-tenant altercation.

Department spokesman Reilly said that according to initial reports, the fire was intentionally set, but that until GFD investigators determine the exact cause, the case will remain open.

The  remote vicinity of the burned-down home is along a jungle dirt trail in Dededo, just off Chalan Natibu, which tee-patterns Y Sengsong Rd. The morning after the fire, the family was sheltering in a makeshift shack that resembled little more than a lean-to, just a stone’s throw from their up-in-smoke home, uncertain of where they’d take shelter from approaching Tropical Storm Maria.

But when PNC contacted the family this morning, Kasinta said the American Red Cross had placed them in the Palm Ridge Hotel for two nights. Kasinta said if her family doesn’t find a place tomorrow, they’ll be sleeping in a parking lot.

If you or your organization can help the Papinory family, please call the numbers, below.

The family members’ names and ages are as follows: