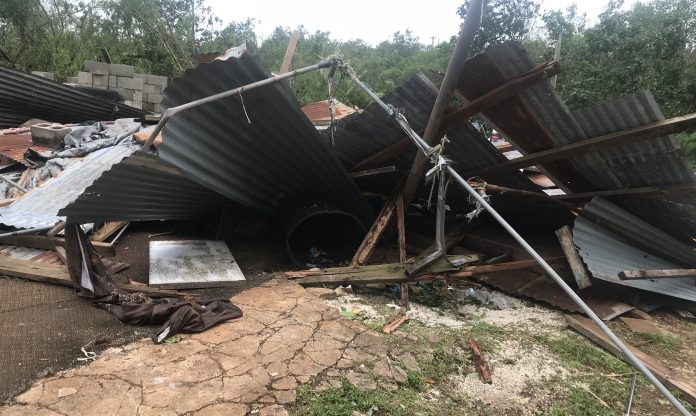 ***SEPT. 13, 2018 UPDATE: To streamline monetary donations for a single mother with three children who have lost everything to Typhoon Mangkhut, a Go Fund Me account has been set up.

The link to the page is https://www.gofundme.com/funding-to-rebuild-our-home or here

Guam – One family that’s lost everything as Typhoon Mangkhut flattened their home is reaching out to the community seeking donations as they have now been displaced.

Redina Perez secured her young children, ages 5, 8 and 14, leaving them with their father before Typhoon Mangkhut’s anticipated arrival.

She remained parked at her house to keep an eye on her home. She tells us she did seek shelter at Maria Ulloa Elementary, albeit a little late, but was told they were full. So, as illogical as it may seem, Redina returned to the one place she always went back to, her beloved home she literally built with her own hands, blood, sweat and tears.

“When I noticed that the winds started to pick up I had to remove my vehicle where I was sitting in through the storm, had to remove myself from here because of the trees surrounding and knowing the fact that it’s gonna collapse,” said Redina.

She eventually left and sought shelter with a family member. But she immediately returned when the winds died down. What she came back to was total destruction.

Redina says she knows she’ll receive criticism for her decision to stay by her home, but she has a reason. She lost her son in May to suicide and continues to grieve to this day. That home was all she had left of her son’s memories. Among the things she frantically tried to save–pictures of her son. Everything else has been destroyed.

“So when I pulled in the driveway, it was completely gone. I sat there and I looked at my son’s picture and I told him I’m sorry,” said Redina as she held back tears. “It hurts and I’m in pain because there’s nothing left.”

And it’s not just memories of her son. Redina was homeless for a while and only recently received the land her house sat on through the Chamorro Land Trust. This piece of property, the first tangible thing to her name, meant everything to Redina and her family.

They invested a lot of their time and effort to making the most of what little they had—and something they could finally say they owned. The sentimental value Redina placed in her land and home meant more than anything money could buy.

Redina says she’s tried to reach out to the Dededo Mayor’s Office but understands that they are inundated with phone calls for assistance and recovery efforts.

She is seeking the community’s help and is accepting donations like blankets, pillows, towels, hygiene products, school uniforms and supplies, food and clothing at her property which is located off of Ysengsong Road on a small road called Rydilla St., just past the coral pit heading north. You can also call her daughter Regina Billuk at 747-8449.