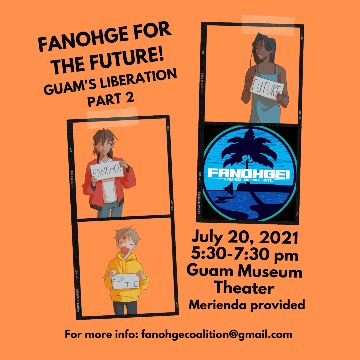 As part of the commemoration of the end of the Japanese occupation of Guam in July 1944, the Fanohge Coalition invites the community to attend its “Fanohge for the Future: Guam’s Liberation Part 2” forum scheduled for July 20 from 5:30 – 7:30 pm at the Guam Museum Theater. A light merienda will be provided for the event.

Each July, our island reflects on its past, in particular its World War II history, where it was the only inhabited US territory to be occupied by the Japanese. Despite the US return in July 1944 bringing an end to a brutal Japanese occupation, it did not end Guam’s colonial status. Although changes have been made in terms of allowing limited local self-governance, Guam remains an unincorporated territory, despite annual celebrations of liberation and American independence.

The Fanohge Coalition encourages the island community, that as we remember these struggles of the past, we also remember that Guam’s liberation remains incomplete, and can only be completed through decolonization and the achievement of a political status that is genuinely self-governing. To facilitate this conversation, the “Fanohge for the Future” forum will feature presentations by the three political status task forces, statehood, free association and independence, as well as voices from the community.

The Fanohge Coalition is a diverse network of 38 community organizations, nonprofits and small businesses that are unified in supporting the right of the CHamoru people to self-determination and the need for Guam to change its political status to something fair and equitable. The Coalition formed last year to help promote these issues during the 2020 campaign season has continued this work in 2021 with the Fanohge Forum Webinar Series.

COVID public health guidelines will be followed for this in-person event, those interested attending can sign up through this EventBrite link (https://www.eventbrite.com/e/fanohge-for-the-future-liberation-part-ii-tickets-161153609785). The forum will also be livestreamed and archived on the Fanohge Coalition’s Facebook page (http://www.facebook.com/fanohgecoalition).