Happy 244th Independence Day to the United States of America. 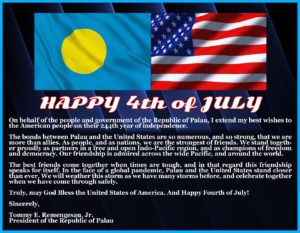 On behalf of the people and government of the Republic of Palau, I extend my best wishes to the American people on their 244th year of independence.

The bonds between Palau and the United States are so numerous and so strong, that we are more than allies. As people, and as nations, we are the strongest of friends. We stand together proudly as partners in a free and open Indo-Pacific region, and as champions of freedom and democracy. Our friendship is admired across the wide Pacific, and around the world.

The best friends come together when times are tough, and in that regard this friendship speaks for itself. In the face of a global pandemic, Palau and the United States stand closer than ever. We will weather this storm as we have many storms before, and celebrate together when we have come through safely.

Truly, may God Bless the United States of America. And Happy Fourth of July!

President of the Republic of Palau 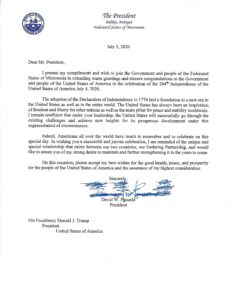 The adoption of the Declaration of Independence in 1976 laid a foundation to a new era in the United States as well as in the entire world. The United States has always been an inspiration of freedom and liberty for other nations as well as the main pillar for peace and stability worldwide. I remain confident that under your leadership, the United States will successfully go through the existing challenges and achieve new heights for its prosperous development under these unprecedented circumstances.

Indeed, Americans all over the world have much to remember and to celebrate on this special day, In wishing you a successful and joyous celebration, I am reminded of the unique and special relationship that exists between our two countries, our Enduring Partnership, and would like to assure you of my strong desire to maintain and further strengthen it in the years to come.

On this occasion, please accept my best wishes for good health, peace, and prosperity for the people of the United States of America and the assurances of my highest consideration.

On behalf of the People and Government of the Republic of the Marshall Islands, I would like to extend my sincere congratulations on your country’s 244th Independence Day.

I greatly value the special and unique relationship our two countries enjoy. Together we can overcome the unprecedented challenges we are facing today, including the COVID-19. I would like to thank the American people for their continued support to the Marshall Islands.

The Compact of Free Association between the United States and the Republic of the Marshall Islands remains the core feature of our strength in advancing peace, stability, prosperity, and democracy in the Indo-Pacific region. The Marshall Islands remains a reliable partner to the United States and proudly hosts the Ronald Reagan Ballistic Missile Defense Test Site on Kwajalein Atoll. Thank you for recognizing the services of our dedicated and proud sons and daughters in the U.S. Armed Forces.

Mr. President, please accept the assurances of my highest consideration.