Guam – 50 year old Ray Rojas died this morning [Thursday] after his vehicle plowed into a concrete power pole on slick roads in Mangilao.

GCC Spokesperson Jayne Flores says the the college community is in mourning. Rojas was the manager of the GCC Book Store and a 21 year employee at the college.

The accident happened on Route 10 about 5:25 am, right in front of the Santa Teresita Church and across the street from the Mangilao Mayor’s office. The roadway was slick from morning showers.

Guam Police PIO Officer A.J. Balajadia says Rojas’s 2007 Dodge Nitro was traveling northbound on Route 10 when he apparently lost control of the vehicle and plowed into the pole.

Guam Fire Spokesman Capt. Andy Arceo says Guam Fire and Rescue personnel had to extract him from the SUV and transported him to GMH. Nursing Supervisor Shirley Quichocho says he was dead on arrival at 6:20 am.

This is the third traffic fatality on Guam’s roads in the past 4 days and the 5th fatal traffic accident of the year. 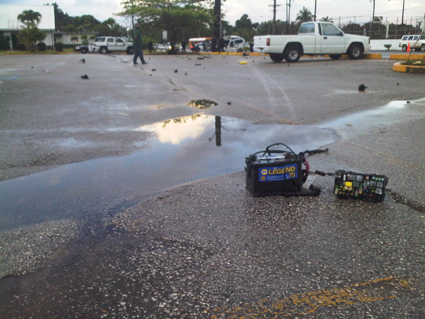 The front of vehicle was literally wrapped around the pole.

The force of the impact was so powerful that the vehicle’s battery was thrown about 20 yards away into the parking lot of the Church. Bits and pieces of the front end, the headlights, a sneaker and other debris from the vehicle was strewn across the parking lot.

The north bound lane of Route 10 was closed off while Highway Patrol investigated the accident scene. North and south bound traffic was funneled into the  2 south bound lanes. All lanes were re-opened about 9:30 this morning.