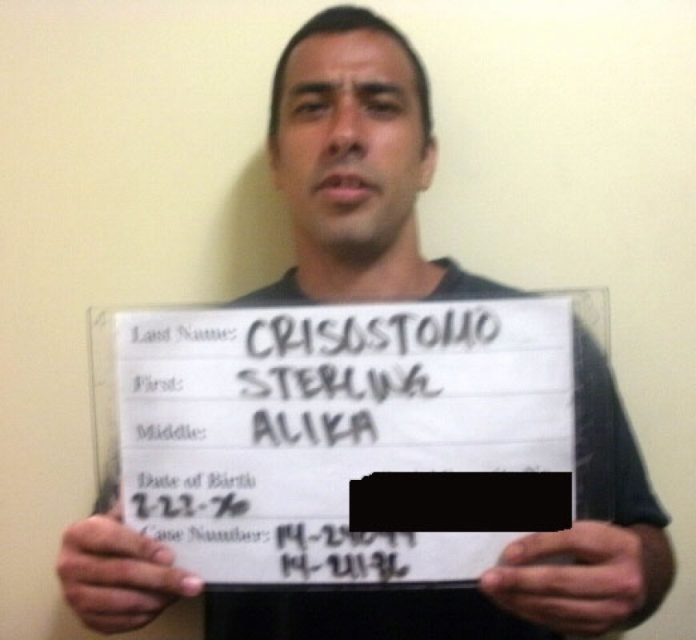 Sterling Crisostomo was released last week and was ordered to have no contact with his minor children. Today, police say they found Crisostomo back at home with his children.

Guam – A man who was accused of starving his children and barricading his family inside their home was arrested again after officers received a tip that he was staying at his children’s residence despite a stay away order.

Sterling Crisostomo was just released from prison last week. But as part of his pre-trial release conditions, Crisostomo was ordered to have no contact with his minor children.

This is because Crisostomo was arrested last December after he allegedly barricaded himself and his children in their apartment in Tamuning. At the time of the incident, Crisostomo was allegedly high on the drug “ice.” He was charged with unlawful restraint as a misdemeanor.

At the time of the incident, Crisostomo was on probation from another case stemming from May 2015 in which he’s accused of starving his children and boarding up his home. In that case, he took a plea deal and was sentenced to five years in prison. However, his sentence was suspended which meant that he would only serve it if he violated the conditions of his plea agreement.

Prior to Crisostomo’s arrest, PNC received a phone call from a concerned resident and retired police officer John Mantanona. Mantanona reported that he received information that Crisostomo was back at his residence with his minor children despite a stay away order.

Mantanona says he also reported this information he received to GPD, the Judiciary’s probation office and to Child Protective Services because he feared for the children’s safety in light of Crisostomo’s alleged history with drugs.

Mantanona says he wasn’t afraid to reveal his identity and to bring the situation to the attention of the media because he believes Crisostomo should never have been released from prison and that he is a danger to his children.