CAMP PHOENIX, Afghanistan – There’s something symbolic about dolphins in the Igitol clan and it’s not just because the mammals constantly swim around their Pacific Island home.

Spc. Brittney Igitol tattooed one on her neck, symbolizing her love for her island culture.

“I’m proud of her and all my kids. Brittney chose to make the same sacrifices I am,” said Ivan. “Our family knows we’re here for the same thing. We wanted to deploy to serve our country; we’re here to help protect our family.”

Groupon: Get the Best Deal in New York Today!
The Igitols are rare military mammals. It’s not often a father and daughter deploy together, let alone in the same unit. They’re the only father-daughter duo among 30 Task Force Guam family pairs deployed to Afghanistan. There are many brother-brother and father-son tandems, but only one Igitols.

The As Matuis, Saipan residents of the Commonwealth of the Northern Mariana Islands are the only family pair of 16 CNMI Soldiers making this historic OEF quest with the Guam Guard. Brittney enlisted as a junior at Kagman High School in 2010. A few months later, Ivan re-enlisted after more than two decades out of military service.

“I knew something was coming up because she kept asking about the military,” Ivan, 48, said about his first encounter with Brittney’s enlistment. “About a month after her enlistment, that was it. That opened the golden gate for me to re-enlist.”

About 300 miles separates the Igitols. Brittney is stationed at Kandahar Airfield, southern Afghanistan, while Ivan calls Camp Eggers his temporary home. That’s in the heart of Afghanistan’s capital. The separation is good and bad, they agreed.

“There are some advantages,” Brittney, 20, said. “I’ve grown, and I don’t have dad watching over me. It makes me feel more independent being away from dad. The disadvantage is missing my dad and his company. I love my dad. Being together, I miss that.”

“We planned on being together this mission, but it just didn’t work out,” Ivan explained. “I tried bringing her into (Headquarters) company, but she changed her mind. She wanted to stay with her original unit.”

Their missions are similar. Brittney’s a tactical driver and her multi-toned, armored fighting vehicle often leads convoys. Ivan’s a driver and troop movement specialist. When not on roads, he tracks other Soldiers, keeping records on their whereabouts.

“I know I roll out of the wire more than he does,” Brittney claims. “He’s not going to argue with me on that.”

Brittney’s the second oldest of her brothers and sisters. Angela Marie, her mother, (“Make sure you call her that,” says Ivan) actively is involved with the Family Readiness program. Husband and daughter agree that Angela Marie has finally adapted to their deployment vows, or at least isn’t worried as much.

“The whole family supports us. They have our backs,” said Ivan. 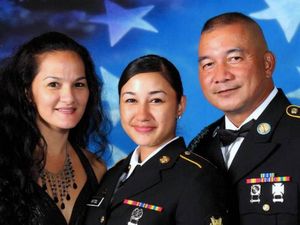 “Mom’s stronger now than when we first left,” added Brittney. “But she knows we’re with good people, good units. We have good leaders who take care of us.”

Ivan and Brittney communicate often. They’ll send text messages or emails, asking each other how missions went. They’ve seen each other just once in Afghanistan. In April, Ivan accompanied battalion leaders to Kandahar. These days, he gives his daughter the same advice he told her back then:

“Keep your head up, keep your guard up. Be vigilant,” Ivan said. “Stay fit and stay alive. Same goes for me. Be vigilant and come back home.”

“I worry about him, especially with everything that goes on in Kabul,” Brittney replied. “But I know he’ll be fine. Dad’s a good man. He’s got good people with him.”

Probably the biggest dolphin mythology of all holds true with the Igitols: Where there are dolphins, there are no sharks.