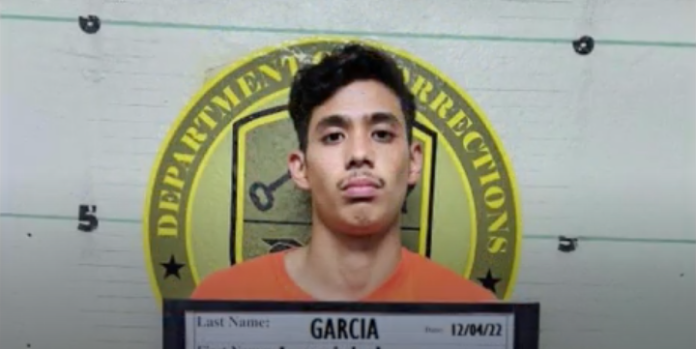 A case of mistaken identity causes a teenager to suffer at the hands of a father and son duo.

Allegedly, 50-year-old Jeffery Garcia and 23-year-old Jeremiah Garcia detained and assaulted a 17-year-old boy. Justifying their actions under the aquation that the teen stole from their home earlier in the day.

In a video circulating social media, the victim can be seen trying to protect himself as a male wearing a white short sleeve shirt later identified as Jeremiah James Torre Garcia was seen striking the face of the victim.

An older shirtless male later identified as Jeffrey James Garcia – together with Jerimiah – are seen pushing the victim’s face against a tree. Afterward, the two adult men are seen continuing to strike the victim and the younger suspect is heard telling the victim, “Get up!”

As he strikes the victim’s midsection, the older suspect is seen slapping the victim on the right side of the face saying, “Look at me when I’m talking to you!”

Court documents say that the victim has bruising on both eyes, the bridge of the nose, the right side of the face and abrasions on the elbow area, and a hemorrhage on the right corner of his eye.

A review of the surveillance footage showed that the victim and his friend were not responsible for the theft and that the defendants used it as an excuse to beat up the victim.

According to the magistrate’s report, both Jeremiah and Jeffrey Garcia are charged with assault as misdemeanors.