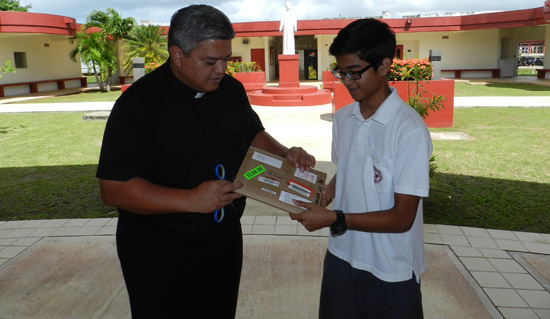 Guam – Close to completion, ‘The Boys’ Chapel,’ is being prepared for its’ consecration. Just recently the school received two relics from Rome containing bone fragments of St. Ignatius of Loyola, founder of the Society of Jesus, commonly known as the Jesuits, and St. Aloysius Gonzaga S.J., patron of students.

The relics, which came from the Jesuit Curia will be used for specific capacities. For communal devotion, the relic of St. Ignatius of Loyola will be available for veneration on specific days to be determined by the school.

The relic of St. Aloysius will be deposited into the altar, a tradition which dates back to the early church. Fr. Jeff San Nicolas, principal of FDMS, expressed his joy in this recent event. “Receiving these relics is a great honor and promotes the spiritual growth of our school and faith on Guam,” comments San Nicolas.

Making reference to the school’s motto, “Fortes in Fide,” Latin for “Strong in the Faith,” San Nicolas comments, “these saints are excellent models of what it means to be strong in the faith,” taking into consideration their heroic and virtuous lives. The school plans on holding a prayer service prior to the Chapel’s consecration which is soon to be determined.

For more information, contact the Father Dueñas Memorial School office at 734.2261 or email us at fdms@fatherduenas.com .