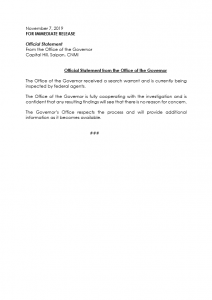 The Federal Bureau of Investigation executed several search warrants on Saipan Thursday morning, including one at the office of CNMI Governor Ralph Torres and the office of an attorney who serves as the local legal counsel for the Imperial Palace casino.

Honolulu based FBI Special Agent Jason White confirmed that search warrants were executed but he declined to say where or what the FBI was looking for.

And sources in the CNMI have confirmed for the Pacific News Center that the office of  Viola Alupuyo was also served with a search warrant. She is the Saipan legal counsel for the Imperial Palace, a Chinese owned casino resort.

Governor Torres’ chief of staff Angel Demapan issued a brief statement Thursday morning which said “the Office of the Governor received a search warrant and is currently being inspected by federal agents.”

It goes on to say that the governor’s office is “fully cooperating with the investigation and is confident that any resulting findings will see that there is no reason for concern.”

“The Governor’s Office respects the process and will provide additional information as it becomes available,” concludes the statement.

Although the FBI has declined to say just who and what they are investigating, privately a number of officials in the CNMI have pointed to the Imperial Palace casino.

A February 2018 article in Bloomberg news reported that when the casino was still operating out of a store front, before its grand opening, it was handling $2 billion dollars a month in gambling bets, far more than other  high stake casinos in Macau or Las Vegas. That article prompted speculation about the possibility of money laundering.

The Bloomberg report alleged that members of Gov. Torres’s family have made millions of dollars through various business deals with Imperial Pacific. Torres and Imperial Pacific have denied any impropriety.

Imperial Pacific filed a lawsuit in Hong Kong against Bloomberg over the articles.