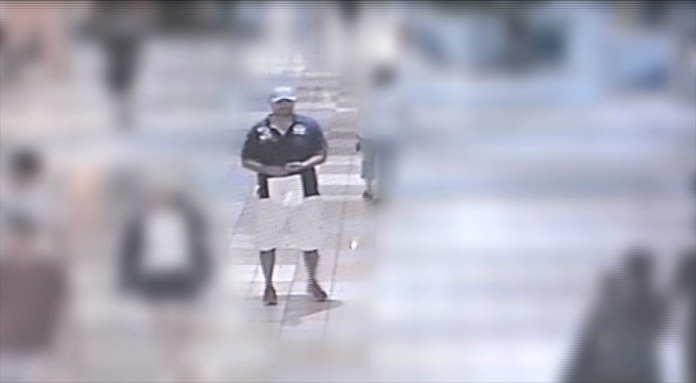 Guam – Video surveillance depicting the man who’s suspected of placing a skimming device on the Bank of Guam ATM at the Micronesian Mall Food court has been released by the FBI.

As you can seen in the video, the man is seen wearing a black t-shirt with the number “3” printed on the back, white cargo shorts, a baseball cap and running shoes.

As indicated in a report filed with the Guam Police Department, the individual who discovered the skimmer was approached by a male individual who attempted to retrieve the device. He described the male as being of European descent.

In the video, he is seen loitering around the Bank of Guam ATM carrying a white bag. He is also seen making conversation with a group of women. It is believed that he is the individual responsible for placing the skimming device on the ATM on June 5.

According to the FBI, “The device was a piece of surreptitious surveillance equipment used to steal from customer accounts, known as a skimmer.”

ATM skimming is a criminal activity that costs U.S. banks hundreds of millions of dollars annually and affect thousands of bank customers.”

The FBI is seeking the public’s help in identifying the male individual. Anyone with information is urged to call the FBI at 645-1809.