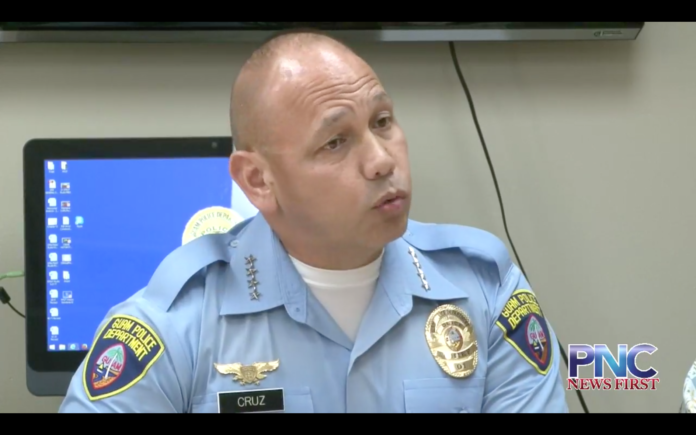 The Guam Police Department says they’ve reached out to the FBI for their assistance.

Guam – The FBI will now be getting involved in the prison death investigation at the Department of Corrections, but they will not necessarily be looking into federal crimes committed. Rather, the FBI will assess the GPD and DOC investigations to ensure it is being done right.

It’s all in an effort to assuage any doubts the public may have about the integrity of the investigation. The FBI will now be getting involved in the death investigation of a prisoner who was apparently beaten to death at the Hagatna Lockup less than two weeks ago.

“We’re taking every step that we need to ensure that we maintain the integrity of the case, so much so that we have even reached out to the federal bureau of investigations and we’ve asked them to assist us by taking a look at both investigations,” noted Chief of Police J.I. Cruz.

But the FBI’s involvement will primarily focus on ensuring GPD and DOC are conducting their separate investigations properly. Cruz says if the FBI determines that any federal violations occurred, then the FBI will handle the matter accordingly. The chief of police, however, repeated several times that he is confident that policies and procedures were being followed.

“I know that there were concerns by the public about the integrity of this case and there were concerns that there could be some kind of impropriety. Again, I wanna assure the people of Guam that with this particular case, as with any other death investigation, we cross every t, we dot every i,” Cruz assured.

But that still doesn’t tell us much about what exactly happened. Here’s what we know so far:

“I cannot speak on behalf of the comments that the chief medical examiner is making, however I will tell you that we are confident in the policies and procedures, the investigative steps that we are taking to maintain integrity in this case,” said Cruz. “We feel that the integrity of the case is still in tact.”

PNC: “What can you say about protocols being followed given the fact that two detainees or two individuals under your custody now have been severely beaten, one resulting in death?”

“Again that’s the main focus in our investigation, in our administrative side. We have all our procedures in place, we have all our [standard operating procedures] in place. Again we constantly talk to our staff to follow these procedures,” Lamorena said.

PNC: “Do you think the issue might be in the SOP or do you think it’s more of a human error [issue]?”

“Again, I think our SOPs–we’ve reviewed, we’re constantly reviewing our SOPs, updating them and we’ve been using them for many years. Again situations like this should not have happened if these SOPs were followed,” noted Lamorena.