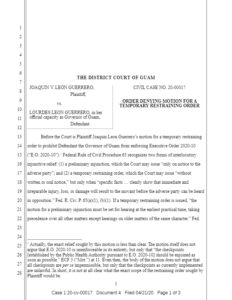 “Actually, the exact relief sought by this motion is less than clear. The motion itself does not argue that E.O. 2020-10 is unenforceable in its entirety, but only that ‘the checkpoints [established by the Public Health Authority pursuant to E.O. 2020-10] should be enjoined as soon as possible.’ ECF 3 (“Mot.”) at 11. Even then, the body of the motion does not argue that all checkpoints are per se impermissible, but only that the checkpoints as currently implemented are unlawful. In short, it is not at all clear what the exact scope of the restraining order sought by Plaintiff would be,” noted the Chief Judge.

The Chief Judge came to the conclusion that threatened injury is neither immediate or irreparable.

According to the plaintiff, the road closures are “a deprivation of his Fourth Amendment rights to be free from unreasonable seizures.”

“It is well-established that the loss of constitutional rights, for even minimal periods of time, unquestionably constitutes irreparable injury,” said the plaintiff.

But merely asserting that “every deprivation of a constitutional right is irreparable was the only attempt made to meet the requirements, which is not sufficient to justify the issuance of a temporary restraining order,” the chief judge’s order stated.

Chief Judge Tydingco-Gatewood stressed that the court takes no position on evidence the plaintiff may muster in support of a motion for a preliminary injunction.

“The Court simply finds that the stringent requirements for emergency relief under Rule 65(b) have not been met,” she ruled.