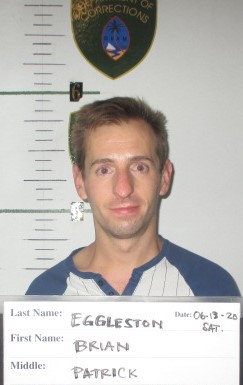 Guam Police responded to a car crash over the weekend, that led to a federal court employee being charged with impaired driving.

Police say around 3:45am Saturday, officers showed up to the scene of a Toyota Camry that had slammed into the concrete median near the Guam Visitor’s Bureau in Tamuning.

The driver, Brian Patrick Eggleston, was identified by his out-of-state California license.

Police says Eggleston was having trouble walking from the front of his vehicle to the truck, and kept grabbing the vehicle to balance himself and stop himself from falling.

Eggleston had red bloodshot watery eyes, slurred speech, and an odor of intoxicating beverage emitted from his breath and person, according to attending officers.

The defendant was asked if he was in the military and he told officers that he was not, however worked in the federal court and had been on Guam for one year.

Eggleston told officers he’d only had one beer, when they asked if he’d been drinking. He refused to comply with Standard Field Sobriety Tests.

A guard watching the entrance to Ypao Beach was a witness for police. He said he heard a loud bang at the front entrance along with screeching and then saw smoke up the road. He did not see the crash itself but when he came around the corner, he saw the vehicle in the middle of the road and Eggleston getting out of the driver’s seat. The guard says Eggleston then attempted to change the tire.

Brian Eggleston has been charge with Driving while Impaired and Reckless Driving.