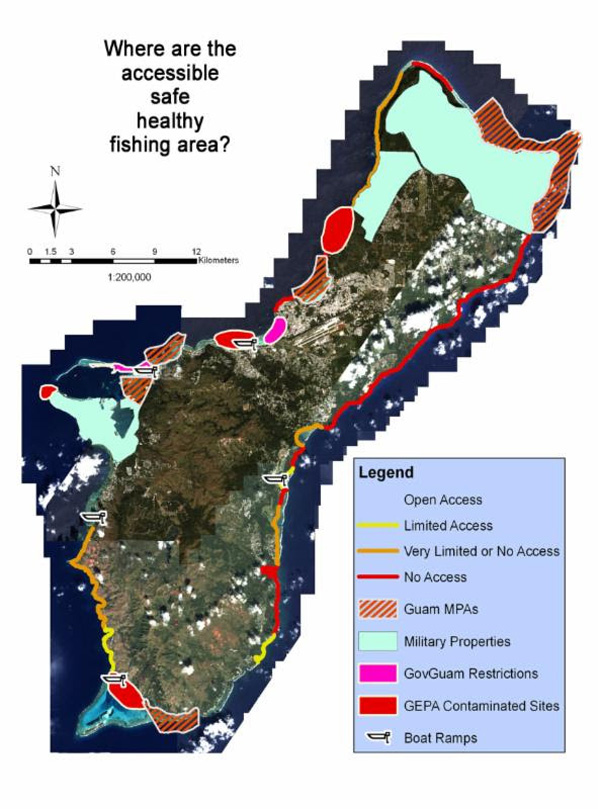 Lack of access to safe and unpolluted fishing grounds, shark depredation, rising fuel costs, lack of fisheries support, competition from citizens of the Federated States of Micronesia (FSM) and Endangered Species Act (ESA) initiatives were among the plethora of complaints presented to the Council.The Western Pacific Regional Fishery Management Council, which has authority over federally managed fisheries in Hawai`i, American Samoa, Guam, the Commonwealth of the Northern Mariana Islands (CNMI) and the US Pacific remote island areas, concluded its four-day meeting today in Tumon, Guam.

Manuel Duenas, president of the Guam Fishermen’s Cooperative, said the situation is at the point where he is ready to quit fishing. He noted that shark depredation, as well as the cost for fuel and fishing supplies, has increased and is negatively impacting Guam’s fishing community. “We don’t have an industry, it’s a community,” he said, noting that fishermen sell only a few fish to cover expenses and the rest is distributed to feed family and neighbors.

Aside from limited access to fishing grounds due to weather and geography, fishermen said the military, marine protected areas (MPAs) and pollution significantly restrict their access to safe waters where they can fish. It was noted that 13 persons have drowned on Guam since the Council’s last meeting in October 2013, in part due to fishermen having to travel farther to reach permitted fishing areas, many times under inclement and unsafe conditions.

“Do not oppress the people who put food on the table,” said Ernest T. Chargualaf, mayor of Merizo (Malesso). He stated that, when Guam’s marine preserves were established, there was supposed to be open rotation. He also said the Guam Department of Agriculture is spending more money addressing deer, which were imported to Guam, than it is on fish, which are a native food source.

Another impact is the ongoing competition with fishermen from FSM, who are allowed to reside in Guam and other areas of the United States as part of FSM’s Compact of Free Association with the United States. Fishermen also worried about potential impacts from the proposed listing of 66 species of coral under the ESA, Apra harbor dredging impacts on coral and fish habitat, and the ocean disposal site 15 miles offshore that may receive 1 million cubic yards of dredged material annually, among other concerns.

The Council responded to the public comments, scientific presentations and advisory group recommendations with the following actions, among others:

* To work with the appropriate Guam agencies to provide for adequate fishing opportunities through fishing infrastructure such as boat ramps in Ylig and Inarajan, as well as fishing aggregation devices (FADs), fishing platforms, fishing ramps and access areas in Hagatna, Agat and Merizo.

* To assist Guam Division of Aquatic and Wildlife Resources (DAWR) with issues related to FAD design, deployment and permits.

* To request that the Guam Department of Agriculture provide access to the Guam marine preserves for the University of Guam’s 4-H fish tagging project.

* To recommend that the National Marine Fisheries Service (NMFS) prioritize cooperative shark research in the Marianas and provide funding and support for proposals for shark depredation studies.

* To support the efforts of and community-based management plan for coastal and marine resources developed by the Malesso community and to assist the mayor’s office in implementation efforts as needed as well as community outreach efforts.

* To facilitate dialogue with the village of Yigo, and other Guam villages in developing a plan to enhance the village fishing access infrastructure as well as to address safety at sea concerns. To work with the government of Guam on addressing the impacts of fishing by Compact of Free Association country residents.

Regarding Hawai`i fisheries, Alton Miyaska of the Hawai`i Division of Aquatic Resources reported on the decision by William Aila, chair of the Department of Land and Natural Resources, to open up six Bottomfish Restricted Fishing Areas (BRFAs) and to keep six BRFAs closed. Miyaska said that, regarding the BRFAs to remain closed, in four of them research has been conducted for seven years and the preliminary draft report is due by the end of the month and, in the other two areas, research may be initiated.

Ed Ebisui, Council vice chair from Hawai`i, thanked the State for opening six BRFAs, but said it didn’t go far enough. “We have the ability to be self-sufficient and we fish responsibly … but it doesn’t get us anywhere but more regulations. … I go to Costco and see imports from countries that are unregulated,” he said. “It is ironic that our imports encourage international illegal, unregulated and unreported (IUU) fishing…. The BRFAs have outlived their usefulness,” he added.

Subsequent to establishment of the BRFAs in the 1990s, both the State and federal fishery managers implemented total allowable catch for bottomfish in 2007 and annual catch limits since 2011.

“This whole thing is kapakahi (messed up),” said Council Executive Director Kitty Simonds. “Fishermen have come to the Council for the last five years, and we told them to wait until the Sate decides what to do and then the Council will review what the State does.” She noted that she was disappointed that the large BRFAs of Penguin Bank and Makapu`u, which are accessible to fishermen, would remain closed. She noted that for seven years the researcher studying the BRFAs has been given more than $300,000 a year upfront and hasn’t come up with a report.

Charles Daxboeck, chair of the Council’s Scientific and Statistical Committee (SSC), said that the SSC members had asked the researcher on numerous occasions to show them his preliminary data. “There’s nothing,” Daxboeck said. “We told him how to do the study correctly, but it is too late.” Daxboeck noted that there is no baseline for the research and that is something the researcher should have done when the BRFAs were established. At this point, to establish a baseline, Daxboeck said, the areas should be opened and fished with both commercial and non-commercial fishermen reporting their catches.

The Council also heard of economic hardships being faced by the longline fishery in American Samoa. To provide temporary relief, the Council voted to begin the process to draft an amendment or framework measure to the Pelagic Fishery Ecosystem Plan that would modify the Large Vessel Prohibited Area (LVPA) for a period of one year. The modification would reduce the northern boundary of the LVPA around Tutuila, Manu`a, and Rose Atoll from 50 nautical miles to 25 nautical miles and around Swains to 12 nautical miles.

In reviewing protected species issues, the Council heard that the status of the main Hawaiian Islands (MHI) insular false killer whale population is based on unpublished analyses of abundance estimates and speculative impacts of fisheries on the population collected through small-boat surveys. These surveys are conducted solely around the leeward sides of the MHI. They are not designed as systematic surveys for the purpose of estimating population abundance and trends. Analyses conducted to date do not adequately account for temporal and environmental variables in the survey effort. Given the lack of structured systematic surveys, NMFS has relied heavily on these ad hoc surveys for decision making to list the population under the ESA and to conduct stock assessments under the Marine Mammal Protection Act. The Council called upon NMFS PIFSC to conduct systematic surveys of the insular false killer whales to allow for a more scientifically rigorous assessment of the population.

Regarding pelagic and international fisheries, the Council reiterated its recommendation for the Western and Central Pacific Fisheries Commission (WCPFC) to adopt spatially explicit management measures to address bigeye tuna overfishing. The WCPFC develops international conservation and management measures (CMMs) for tuna and other migratory species in the Western and Central Pacific Ocean. The Council recommended that NMFS work with Council staff to use information identified in the bigeye tuna movement workshop to develop spatially explicit proposals. It also recommended that the US Delegation to the WCPFC continue to press for greater compliance by member countries and participating territories with the CMMs, including the provision of operational data, and that those countries that exceed CMM limits be subjected to penalties commensurate with the scale of overages.

During the public comment period on non-agenda items, students from two Guam high schools and Guam Community College advocated for a Guam shark sanctuary. Council senior scientist Paul Dalzell talked to the students about environmental consequences of management decisions. Council Chair Arnold Palacios thanked them for taking the time to participate in the Council’s public participatory process and noted that their comments are valued.

Council recommendations are transmitted to the Secretary of Commerce for final approval. For the full
Council meeting agenda and background documents, go to meetings section of the Council’s website at www.wpcouncil.org.