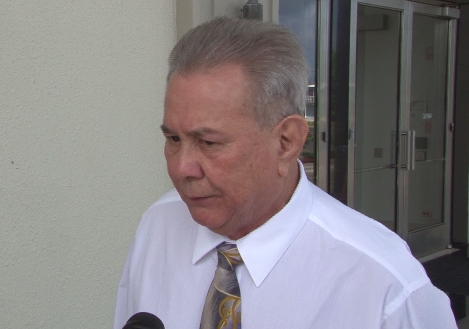 The legal counsels for former GHURA Attorney Mark Smith and his friend Glen Wong are getting impatient with the federal government’s delay on providing discovery for the housing fraud case.

Guam – Mark Smith and Glen Wong were indicted on Section 8 housing fraud charges after a years-long investigation revealed that Smith served as legal counsel for GHURA while also a section 8 landlord. The prosecution alleges that Smith then transferred his properties to Wong but continued to benefit from the section 8 program by funneling money through Wong.

In federal court today, Asst. U.S. Atty. Marivic David told the court that their motion for extension of time is not the issue since they claim they are ready to produce 85,000 pages of discovery. She stressed that she was more concerned with the motion for entry of protective order since a large portion of those thousands of pages of discovery have personal information, such as social security numbers and financial account statements.

Smith’s attorney, David Lujan, however, says he feel the government is playing a game to delay the trial as much as possible, since that discovery was ordered by the court to be submitted by the 5th of April, and later extended to the 10th. “We are entitled to discovery at the proper time and as ordered by the court. But the reason we objected to it was because of the three-week delay that they had requested,” Lujan told PNC. “The government should have been prepared to go to trial. We are prepared to go to trial; we want to go to trial as soon as possible because, in the meantime, our clients are both handicapped. They’re not fully employed at this time simply because of what’s hanging over their heads… But that’s the style of the government. The government doesn’t play fair. The government has this attitude of win at all costs… There’s a saying that may sound corny, but it’s still true, and that is ‘justice delayed is justice denied,’ and that’s what’s occurring here right now.”

Another issue the government has raised was a Motion to Disqualify David Lujan as Smith’s legal counsel. In their motion, they cite Lujan’s prior representation of GHURA as a conflict of interest since GHURA employees will be witnesses for the government. However, Atty. Lujan says he is confident he will continue to be Smith’s attorney. “The government has filed a motion to disqualify me. In my opinion, it’s a B.S. motion,” Lujan expressed. “The government tried to set up my disqualification by subpoenaing me to the grand jury on March 14. And that’s the same day that the grand jury returned an indictment. And to ask about my role when I was a lawyer at GHURA, which had absolutely nothing to do with this, it was a scheme by the government to create a disqualifying factor… I feel confident that I’ll still be Mr. Smith’s attorney, and much to the disappointment of the government.”

A hearing where arguments will be heard on the motion to disqualify counsel will be on May 17 at 1:30 p.m.