Guam – Female law enforcement officers from throughout the Pacific are gathered on Guam for a 2 day conference entitled “Pacific Police Women Promoting Change”.

Participants are here from Fiji, the FSM, New Zealand, the CNMI,  the Marshal Islands and other Pacific Island Nations.

Organizers say one of the goals of the conference is to encourage greater participation of women in police leadership and management.

The conference is sponsored by the Pacific Island’s Chiefs of Police and the Women’s Advisory Network. Guam and the Federated States of Micronesia are co-hosting the event.

The 2 day event wraps up Wednesday. 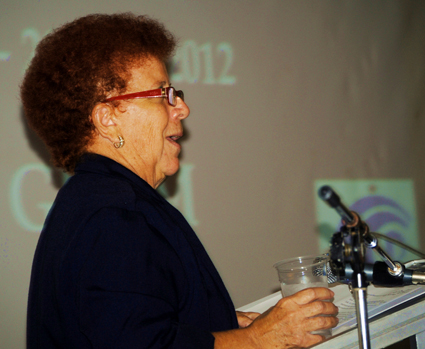 I have to tell you, off the top, how impressed I am by the makeup of the audience today. It’s truly international and represents a cross section of police organizations if not all of the governments of our region—from very large to very small. It speaks very well of the progress we’ve made.

What it also tells me is that the importance of women in policing our countries and communities is long past being a matter of debate in law enforcement communities. We’re entrenched as part of the establishment and the purpose of such gatherings as this is to figure out how to use our responsible positions to make the system work better rather than to plot how to tunnel our way into these positions.

I’m not sure how well the term ‘Pep Talk’ translates internationally. Certainly it applies to soccer or rugby. Perhaps you’ve seen a Hollywood movie in which the home team is trailing far behind at half time. The coach—maybe Ronald Reagan—comes into the locker room and his words—his Pep Talk— spur his players to victory.

Well, that’s at least how old-fashioned Hollywood would have had it end. In police work, we’re paid to be realists and we know that life doesn’t always have such happy endings.

The Pep Talk I want to give you contains plenty of gray as well as the black and white in which the good guys win and we march the bad guys off to jail. There’s a lot of politics to contend with and we all know that those old stereotypes that drive resistance to women serving in traditionally male roles are still in place with many people. A lot of us have had to open our eyes to the reality that the ‘public service’ we perform requires that we also change entrenched attitudes of our male colleagues. Unsurprisingly, many of them see no need to change.

My introduction to all this came back in the 1980s. Things were going pretty well for me. I had completed my doctoral program and won tenure as a Professor of Public Administration at the University of Guam.

I was pretty happy in my ivy tower, teaching government management as it should be rather than as it really operates.

Then along came our then-Governor, Ricky Bordallo and tossed me a challenge otherwise known as the Guam Department of Public Safety.

Back in the 1980s in Guam, you wouldn’t have gotten an argument from many people that DPS wasn’t a highly problematic public agency. All you needed to do was pick up the morning paper for the latest reports or stop by the courthouse to follow the trials of officers accused of corruption and misconduct. If some of those reports were overblown at the time, the public perception of DPS was largely negative and lacking in trust, a huge obstacle to its efficient operation and performance of its mission.

Governor Bordallo’s argument was pretty simple: You shouldn’t be teaching how government management works if you can’t make it work yourself. So I took a leave from the academic world and entered a new and challenging world.

But neither these things, nor academic knowledge, quite prepared me for what I faced when I walked through the door of the local DPS police and fire headquarters the first day. The struggle began then and didn’t end until I walked out the door and back to the campus nearly four years later.

In the spirit of a Pep Talk, I wish that I could simply say, do this, do that and everything will be magically fixed. Unfortunately, it’s not so. Keeping control of such a complex organization as a law enforcement organization has often seemed to me like the classic, “one step forward and two steps back” situation.

It’s a constant struggle, but it’s got to be done and after all these years and the energy that we’ve put into it, we’re reaping some rewards.

I am very pleased to see your emphasis on the need for ethical behavior and professionalism within police services. As someone who has headed a large police agency, there is no question in my mind about the importance of this, but let’s not forget that these same standard must be applied throughout the governments that employ and supervise the police.

I am particularly sensitive to this as the former Chairperson of the Guam Legislature’s Committee on Ethics and Professional Standards, given that the Legislature has oversight of all local law enforcement agencies.

In that role, circumstances required that I make some tough decisions that sometimes did not go over very well with my colleagues, but if we cannot apply the same standards to ourselves as lawmakers that we do to the agencies we oversee, what kind of example are we setting?

There’s an old piece of advice that used to be conventional wisdom in the United States Congress. Quote:

To get along, go along, unquote. With all due respect to the late and legendary Speaker Sam Rayburn of the US House of Representatives, that is the opposite of how we should think in law enforcement or lawmaking.

The cynical meaning of the quote is that we should look the other way to avoid offending wrong-doers who can help advance our careers. To me, this is just the start of the slippery slope that leads to corruption and malfeasance in law enforcement. In a properly run governing system that is basically
healthy, as I believe ours is, this is the attitude that can steer individuals onto the rocks of investigation and disgrace.

It’s commendable as well that your organization is concerned with communication between regional law enforcement agencies. Thirty years ago, I couldn’t have imagined a group with the diversity of the one assembled here today. I look at all of you and I am very proud and this is in large measure due to the message about the role of women being successfully disseminated in what is really a very short period of time.

Now back to when I left law enforcement to return to academia. You won’t be surprised to learn that there was a political component involved. In Guam and many other jurisdictions, when there are political intramurals, a new administration is voted in and top law enforcement management exits. This is to be expected in a democracy, though it is disruptive to ongoing operations. On the other hand, citizens can be assured that the administration of justice is not going to remain under the hand of unelected officials forever.

Understandably, my experience has made me a constant observer of the local policing process on Guam and throughout the Western Pacific, and as this talk suggests, I see both progress as well as an ongoing desire by some in the system to turn back the clock whenever possible. I would have to admit that while I am still disappointed by the limited number of women engaged in law enforcement today, I am encouraged to see that few women in that field and others are willing to quietly tolerate sexual harassment on the job or any other form of career discrimination. That’s a huge improvement!

Now, if there’s a bottom line message to this little Pep Talk, it’s that we women together with our male colleagues need to continue to work hard to maintain our high standards in law enforcement and any other endeavors intended to serve the public.

As one of our first American Presidents, Thomas Jefferson said, “The price of freedom is eternal vigilance.” To me, this sounds like the right attitude to maintain, so that every day we can win the game for our team… The public that we serve. Welcome to Guam, America’s best kept secret in the Pacific-Asia region!