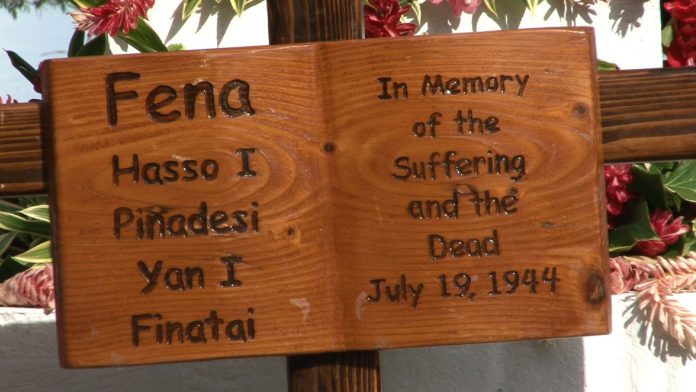 Lawmakers, military service members and officials from japan presented wreaths at the graves of those who died at Fena.

Guam – Leading up to the liberation parade, Guam residents and visitors pay homage to the Chamorro’s who were massacred during World War 2.

The 72nd liberation parade is fast approaching and leading up to the event, we remember some of the tragic events that led up to Guam’s liberation.

One of those events is the Fena tragedy. The late author and historian Tony Palomo calls Fena an “ancient Chamorro village, once inhabited by carefree and happy people.” However, just two days before us troops landed on Guam, Japanese soldiers rounded up residents under false hopes and rounded them into caves in the Fena area. After the Chamorro’s were rounded up, Japanese soldiers began to kill helpless Chamorro’s. 34 residents died in the Fena caves that day.

Today, a memorial service, organized by the mayors council of Guam, The Agat mayor, vice mayor and countless others took pace Tuesday.

“As we celebrate our theme of the 72nd liberation festivities. “Håtsa: the revitalization of our people and our land. Today we will Håtsa the names of our people who perished on the Fena cave massacre. We will also Hatsa our land by visiting the Fena cave site which we did earlier which is such an important part of our history,” said Agat mayor Carol S. Tayama.

Military servicemen and women, lawmakers and residents gathered on buses to the Fena cave memorial to pay homage to those who died. All in all 34 residents died and 85 survived the Fena massacre.

Lawmakers, military service members and officials from japan presented wreaths at the graves of those who died at Fena.