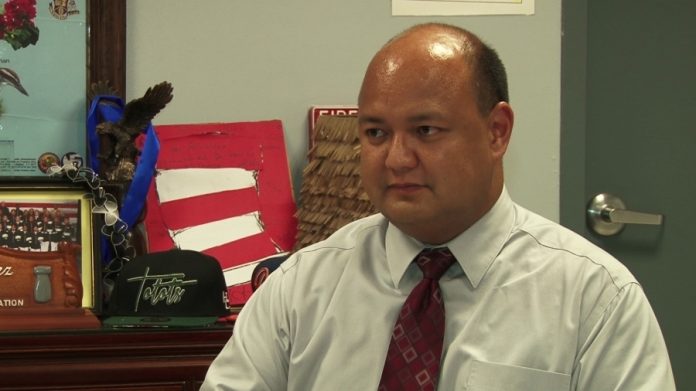 Attorney Gary Gumataotao responded to Lujan, pointing out that the actions taken by the board so far were all part of Fernandez’s contract.

Guam – Attorney David Lujan is ending his weeks-long silence on the termination of Guam Department of Education Superintendent Jon Fernandez’s contract, calling it illegal, unfair and a witch hunt.

It’s been about three weeks since the Guam Education Board voted to terminate Superintendent Jon Fernandez’s contract and during those three weeks, noticeable silence from Fernandez and his attorney, David Lujan. But yesterday, Lujan issued a statement, beginning by pointing out how patient and cooperative Fernandez has been despite what he calls the unfair process by which he was terminated.

Fernandez’s contract was terminated in the late evening of October 3 by a vote of 6 to 3 after nearly 10 hours of executive session. The board based their decision on an investigative report prepared by their contracted legal counsel Attorney Gary Gumataotao. That report contained five alleged Title IX violations.

The first involved a sexual harassment complaint by a JP Torres Alternative School student that initiated the investigation. The second was about an alleged sexual affair between Fernandez and a GDOE employee that resulted in the employee’s wrongful termination. The third allegation was about nude photographs of a teacher that circulated in December 2014. The fourth allegation was from an employee with a disability who was forced to work on traffic duties, resulting in an $80,000 settlement; and the last allegations was another sexual harassment complaint an employee made against a co-worker that Fernandez allegedly failed to investigate.

In his statement, Lujan says due process for Fernandez was ignored and Fernandez’s contract was violated. Lujan called Gumataotao’s actions deplorable.

“Mr. Gumataotao has made himself readily available to reporters throughout this process to confirm information contained in his confidential investigation report as well as in his confidential bill of particulars. It’s deplorable that he would do so even before Mr. Fernandez had a chance to receive and review this sensitive information,” Lujan wrote.

In response to his statements, Gumataotao today said that every action he and the board took was based on Fernandez’s contract. In fact, Gumataotao points out that Fernandez himself negotiated his contract when he was first hired as GDOE superintendent.

In a statement to PNC, Gumataotao said, “The contract was negotiated by Jon Fernandez who is a law school graduate and had ample time to confer with an attorney before signing.”

Lujan is now demanding that the board “regain control of its legal counsel, fulfill its responsibilities as a board in reviewing and approving substantive matters being sent in its name, and ending this witch hunt which started as an allegation made by a student almost five months ago, which has yet to be substantiated or resolved.”

Lujan adds that he believes the Title IX allegations were built on “false accusations and a conspiracy by several individuals to obtain several benefits from the board and superintendent.”

While Lujan says they look forward to “answering any allegations,” the process by which Fernandez was terminated and the actions thereafter has already been tainted. “He should be reinstated as soon as possible,” he said.

PNC sent follow up questions to Fernandez and Lujan but did not get a response as of news time.

You can read his full statement by clicking on the file below.