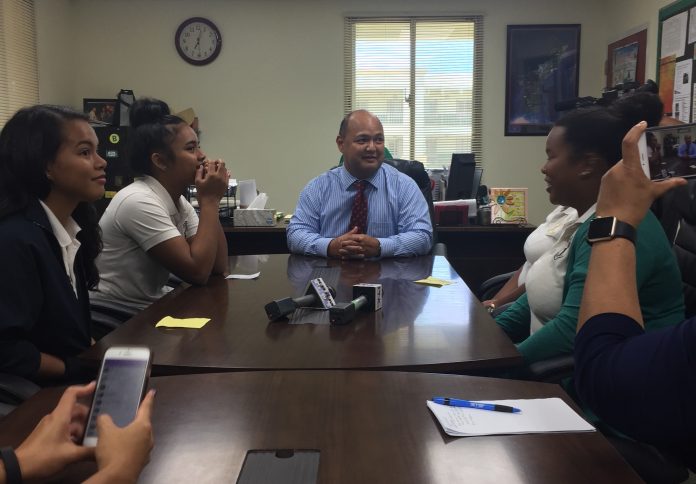 Guam – Superintendent Jon Fernandez returned to the Department of Education this morning, but he tells PNC that jumping right back into work in the middle of the school year is not going to be easy.

For the first time in eight months, Fernandez visited with the largest stakeholders at GDOE: the students.

“So, when I first arrived here, it feels like a new start, like I’m starting over. So it feels effective to go out to all the schools and  make sure I have a good feeling and know what the challenges are, what’s working,” he said.

For Fernandez, that involves figuring out which issues are prioritized first. Although he says one measure has been brought to his attention almost immediately upon his return.

“The question we have been getting is ‘what’s the best way to engage with students?'”, he shared. Adding that one of the issues people have asked him lately has been centered around whether he should continue to utilize social media as the primary source for student communication.

“And I said, ‘of course!’ There wasn’t a platform when I started. But what we need to think about is how to structure that it so that maybe it’s institutionalized and gives the students multiple ways to reach the students at multiple levels in the department,” he shared.

The superintendent spent his day meeting with some of his core student supporters this afternoon. Particularly the individuals responsible for the pro-Fernandez protest.

Similarly, last night’s announcement of the superintendent’s return was also met with soft cheers from the audience.

The last few months leading up to the superintendent’s return has been tumultuous to say the least, for both the board and the superintendent. Fernandez was placed on administrative leave in July of last year after allegations of sexual misconduct from a JP Torres high school student surfaced. Then, in October, GEB voted 6-3 to terminated the superintendent’s contract. The decision was met with great controversy, garnering the attention of Governor Eddie Calvo.

The months to follow for the board was riddled with allegations of infighting, subsequent resignations, and even a $7million lawsuit.

In the New Year, the addition of three fresh faces to the board proved to be more united.

Last month, the board unanimously carried five motions to reinstate the ousted superintendent, but the journey to Fernandez’s return wasn’t over just yet.  GEB Chairman Peter Alecxis Ada tasked select board members to speak with the superintendent directly. The talks continued until last evening when the board voted on the final pieces of negotiations.

The two motions included committing to pay up to $60,000 worth of legal fees that Fernandez has incurred and amending the superintendent’s contract to reflect a 3% incremental increase for every year from the last three years. That raise in Fernandez’s salary equates to about $163,500 effective in July of this year.

Both motions carried with unanimous approval. Although the superintendent readily accepted his reinstatement last evening, GEB member Ron McNinch told PNC that this is not necessarily a “win” for Fernandez per se.

“I always say this related to this scenario: there are no winners here. Everybody lost. And the public lost faith in the board. Fernandez lost a lot in this process. No one is dancing like they won here; this is a very dark set of days and nights for the board and for the education board on Guam and we just want to move on,” McNinch said.

Meanwhile, the superintendent says he looks forward to continuing the ongoing discussions with GEB not only on the motions they recently passed but on prioritizing issues for the rest of the academic year.