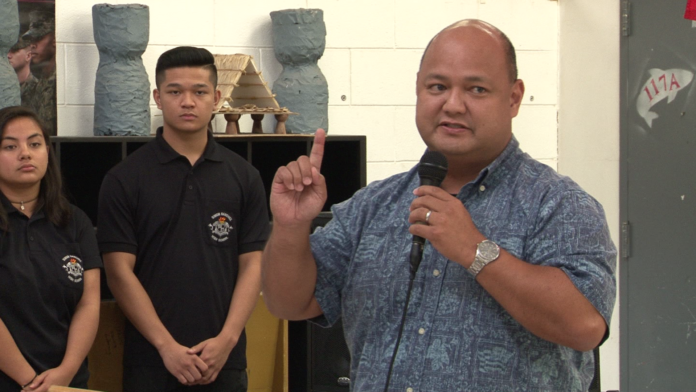 Guam – Now that the Guam Department of Education will take over the procurement for Simon Sanchez High School’s reconstruction, what will become of the pending lawsuit by Core Tech International?

GDOE Superintendent Jon Fernandez made that announcement during a certificate presentation at Simon Sanchez High School today where students and local leaders seemed to be celebrating the passage of bill 204 into law.

But as the Yigo mayor so fiercely pointed out, the work is not over. He continued the call to island leaders to talk the talk and walk the walk.

“Maybe it’s a good thing that the news media is here because there’s a lot of leaders here that listen but don’t talk. I see signs that when you hear something and you see something you talk and I think this is one of the more important issues here in Guam that Simon Sanchez kids have been calling for help but nobody’s answering,” Matanane said emphatically to the cheers and applause of the crowd made up of SSHS students.

Meantime, Fernandez says he will be reaching out to Core Tech International to drop their pending lawsuit in Superior Court.

When the procurement was under the purview of the Department of Public Works, Core Tech filed protest after protest after losing the bid, alleging impropriety in the way the RFP was handled. Now that the law turns over procuring authority to GDOE, a completely new process for the RFP can begin.

“What we’re gonna ask them is this: the legislature and the governor, through allowing this bill to lapse into law, they’ve given the Guam Department of Education and the superintendent the authority to take over this process to move it forward,” Fernandez points out. “We ask you to drop your legal challenges to remove these obstacles and to allow the Guam Department of Education to start new … give us a chance to get started, give us a chance to start new and do it because this is the right thing to do for the students of Simon Sanchez High School.”

Fernandez said he will be sending Core Tech a letter today.