Guam – An excited delegation from Guam arrived in Honiara, Solomon Islands on Friday, June 29, 2012 to attend the 11th Festival of Pacific Arts (FOPA).

The group was greeted at the Honiara airport to a warm reception of Solomon Island hospitality, cultural performances and refreshments then transported to Kukum, (koo-koom) a local college campus with dormitories where they will be housed over the next two weeks.

Monica Guzman, the Board Chairwoman of the Guam Council on the Arts & Humanities Agency (CAHA) is the official head of the Guam delegation. The 130-strong delegation is comprised of cultural performers from the På’a Taotao Tano and I Finlalai’an cultural groups; traditional artists featuring carving, blacksmithing and weaving; culinary arts; visual and folk arts which include film, performance theater, and fashion; literary arts and story telling; and navigation and seafaring traditions. 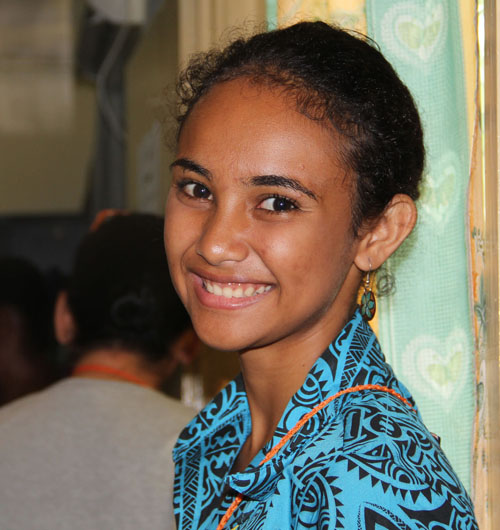 On Sunday July 1, 2012, many of the Guam attended worship service at the Holy Cross Catholic Church. The beautiful mass became an impromptu cross-cultural celebration with different ethnic groups participating with a song or prayer in their native tongue. The Guam contingent sang the Chamorro mass song “O Maria Nanan Magof” in beautiful harmony. 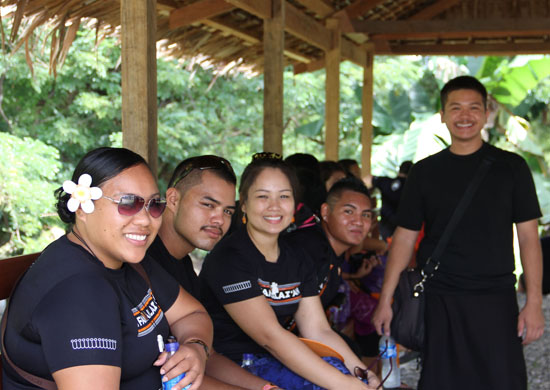 [Members of I Finlalai’an relax underneath the Canteen Hut after a meal.]

The first official day of the festival Monday, July 2, 2012, was kicked-off with an awesome seaside welcome of the seven (7) double-hulled Polynesian canoes that sailed from as far as Samoa, Tahiti and New Zealand to the festival. These traditional open-ocean sailing vessels were flanked by a flotilla of ten (10) 20-man Solomon Island war canoes or tomokos that had sailed to Honiara for over two weeks on only human power from the outer Solomon Island provinces. Guam’s cultural performers participated in the 3-hour beach welcome of dances and chants that began at 5:00 am with fireworks and symbolic gift giving which culminated after the seafarers were allowed to step foot on land. 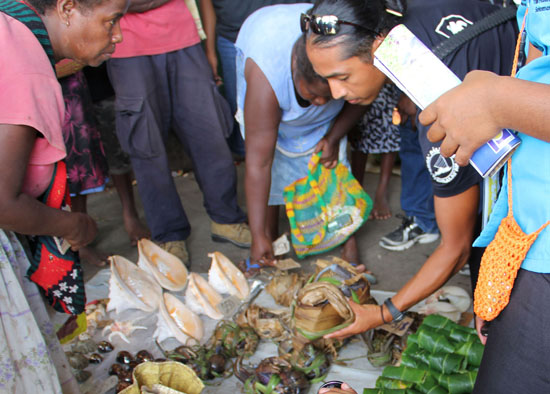 That evening, the official opening ceremony which began at 4:00 pm provided even more energy, color and excitement as 3,000 delegates, representing twenty-two (22) Pacific Island nations, and the nine (9) Solomon Island provinces, marched into the Lawson Tama soccer stadium in native island wear and cultural themed uniforms, to a packed stadium and hillside audience of nearly 10,000 Solomon Islanders. 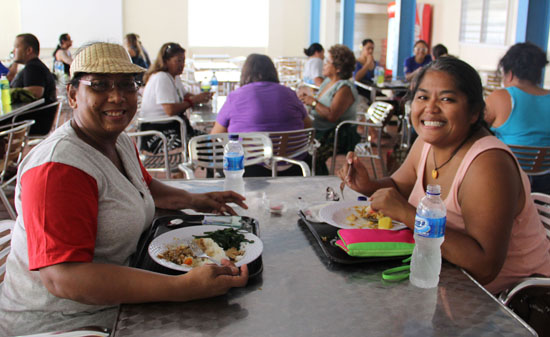 [Guam members in the cafeteria at Kukum Campus]

Part of the evening’s program included a 10-minute cultural and gift presentation from each delegation to the festival host and organizing committee. Guam presented a beautifully carved wooden replica of a traditional Chamorro house built on latte foundations, symbolizing Guam’s gratitude at being so warmly welcomed into the Solomon Islanders’ home.