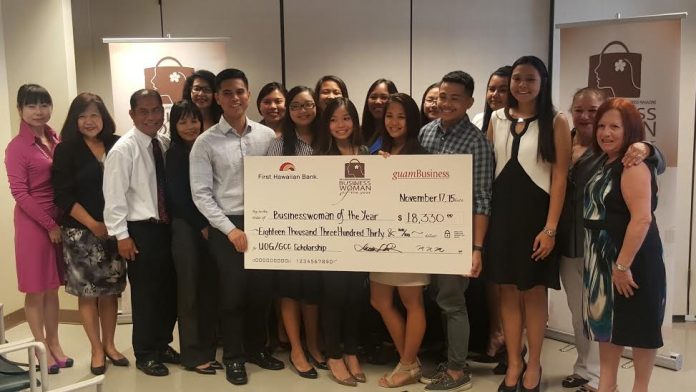 13 college students from both the University of Guam and the Guam Community College received scholarship money thanks to the First Hawaiian Bank and Guam Business Magazine Businesswoman of the Year program.

Guam – According to a release, the scholarships totaling about $18-thousand dollars were awarded to 10 students from UOG and three from GCC and are intended to promote higher education through financial assistance for college students pursuing professional careers in business.  Scholarship applications were open to full- and part-time students at the University of Guam, Guam Community College and Northern Marianas College. Awards were based on the recipients’ total number of credit hours for the semester, GPA of 3.0 or higher, involvement in the community and potential for success in business. To be eligible for the award, applicants were required to submit written essays and evidence of financial need.

Guam Business Magazine Publisher Maureen Maratita says, “Our aim is to support you. Ten years into the program, we have some students we have supported more than once and we’re delighted about that.”
“It’s been our privilege to be part of your further academic achievements with this scholarships, it’s been ten years since we’re doing this. It’s a rewarding program,” says FHB Senior Vice President Laura-Lynn Dacanay.
Since 2006, the program has awarded a total of about $207-thousand in scholarships to 111 deserving students in Guam and the Northern Mariana Islands. Funds for the scholarships are raised through the annual First Hawaiian Bank and Guam Business Magazine Businesswoman of the Year Gala. This year’s event was held on September 6 of last year.