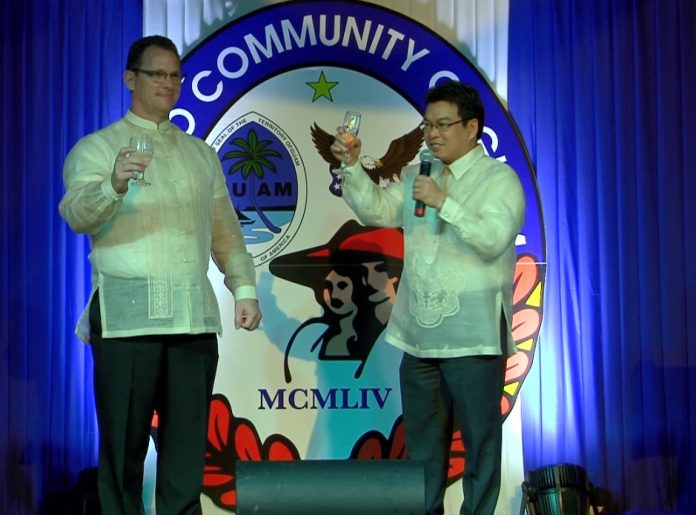 The Filipino community of Guam along with millions of Filipinos around the world, celebrated the 117th anniversary Philippine on Saturday with many distinguished members of both the Filipino and Guamanian society were in attendance.

The Filipino community of Guam along with Lt. Gov. Ray Tenorio and other distinguished members of the community gathered on Saturday to celebrate Philippine Independence Day.

“We are defined by our hard work, our persistence, our craftsmanship and our attention to detail and of course, our beauty.” Said Baldovino

The ceremony was held at the Pacific Islands Club Pavilion in Tumon. Members of the Filipino Community of Guam as well as members of the government gathered together to drink and eat in celebration of the declaration of Philippine Independence 117 years ago. Consul General of the Philippines Marciano De Borja praised the ceremony saying it was the biggest ceremony he’s seen in his 20 years of Foreign Service. He adds that the Filipino community on Guam is a community to be envied.

“Every time the ambassador in Washington and all the consuls general in New York, in Chicago, Los Angeles, San Francisco, Hawaii–whenever they complain about how to handle the Filipino communities there I just keep quiet; I don’t say anything because they don’t have it here on Guam.” Said De Borja

Lt. Gov. Ray Tenorio speaking on behalf of Gov. Calvo took to the stage to give his thanks and praise to the Filipinos on Guam who “cut the road” and helped make Guam the island it is today. Tenorio lifted his glass to the traditional Tagolog greeting with the crowd chanting along.

“On behalf of governor Eddie Calvo, first lady Christine, my wife Naoko and all our administration we say to you ‘Mabuhay, Mabuhay, Biba!’” Said Tenorio