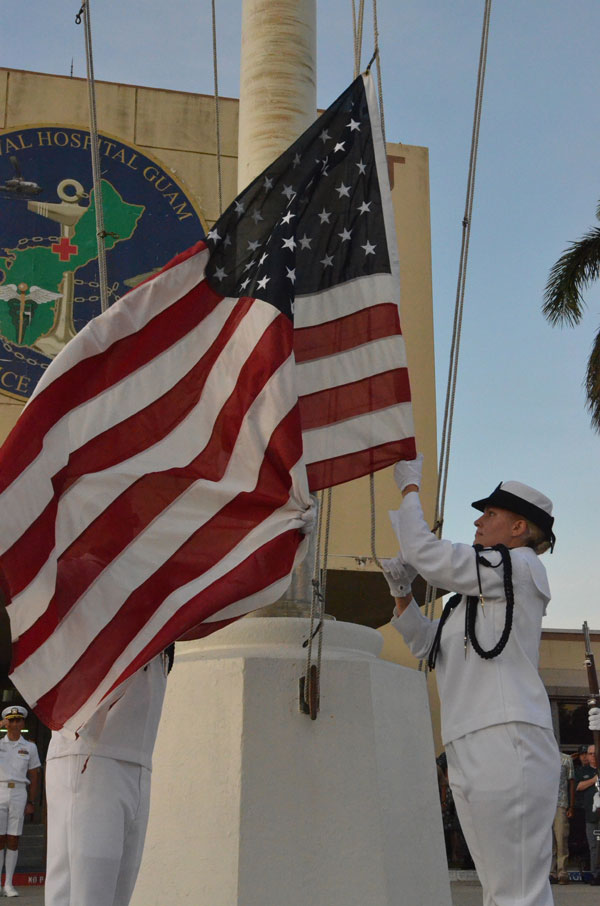 Agana Heights, Guam – (April 15) – There are many firsts at a hospital but for U.S. Naval Hospital Guam, April 14th held at the 1954 constructed building, as the staff will be moving into their new facility this week.

“We will be casing our colors for the next 7 days, but we will once again share the sounds of freedom when we raise them up again over our new facility. This hospital has been an icon on this island, and we honor its history, of both triumph and tragedy, in this evening’s ceremony,” said Capt. Jeff Plummer the hospital’s commanding officer.

Although Navy Medicine has been present on Guam since 1899, the current facility opened on Nov. 2, 1954, making it one of the oldest military treatment facilities (MTF) in the Navy Bureau of Medicine and Surgery (BUMED) inventory. Over the last 60 years the hospital served major roles, whether medical or logistical, during the Cold War and Vietnam War caring for hundreds of injured Soldiers and Marines. It has also housed thousands of refugees during natural disasters such as typhoons, and political angst that occurred in its region.

The replacement hospital was built because the 1954 hospital design is out of date with the current standards in American medicine. The new design however, provides a modern environment of care, tied primarily to the outpatient ambulatory care model, while retaining a core inpatient capability that is fully functional. The replacement hospital, will open April 21st and will transfer services function for function, with MRI being offered as a new service.

“We look forward to realizing many efficiencies in healthcare delivery associated with the replacement hospital and we anticipate more smiles from our patients and staff as they visit and work in this modern facility,” said Plummer.

on the “New Hospital” tab at the top of the page. You can also find us on Facebook at https://

www.facebook.com/USNHGUAM or you contact the hospital’s Public Affairs Office at 344-