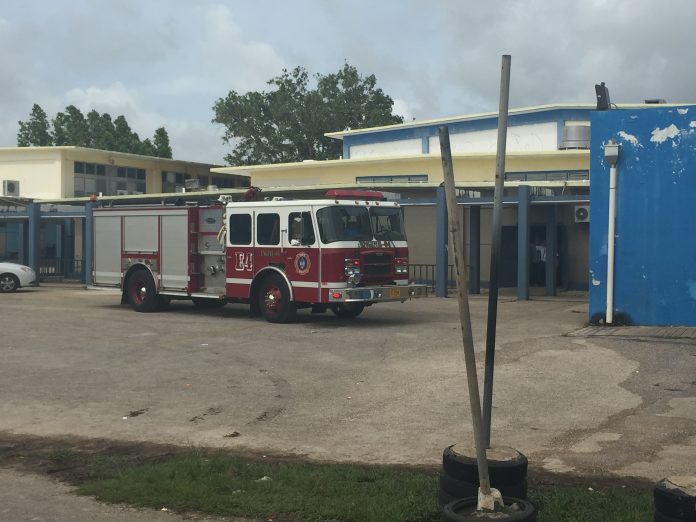 The fire was reported at 2:30 pm prompting a school-wide evacuation. Authorities suspect the cause to be electrical in nature as the fire appears to have originated with a light fixture inside the cafeteria kitchen.

Guam – A fire broke out at Benavente Middle School this afternoon and as a result over 1,200 students had to be evacuated. But officials say no injuries were reported.

The fire was reported at around 2:30 this afternoon inside the school’s kitchen where meals are prepared. Lilian Buensuceso, supervisor for Sodexo, the vendor that prepares meals for Benavente Middle School students, was inside at the time it happened.

“It was cleaning time already because we we’re done feeding the kids and then I was in my office doing my paper work. I heard something blow up and then when I saw the light at the top …  it was just burning right away so I just shouted at my crew to go out and run outside. I called the office and pulled the fire alarm thing,” says Buensuceso.

BMS Principal Dexter Fullo says fortunately, a school staff member was near the area when it happened and was able to use a fire extinguisher to put out the fire within minutes. Firefighters were then called to the scene.

“To take precaution, we called GFD to come over, inspect the area, make sure to give the all clear, while our students were evacuated in their respective sites,” says Fullo.

Guam Fire Spokesman Kevin Reilly says fire investigators will be investigating the cause of the fire, but principal Fullo says officials suspect the fire was caused by an electrical issue. It appears to have originated with a light fixture he says.

“The light bulbs popped and the pop caused the debris to start catching fire on the floor and on the roof,” Fullo explains.. “Guam fire was here. They are investigating it. They came by gave us the all clear. What we’re doing right now is working with GPA to shut down and isolate the power issue and then the investigation will commence.”

In the meantime, Fullo says they will wait to get the all clear as far as reopening the kitchen. Even if the cafeteria kitchen is unable to reopen in time for school tomorrow, Fullo says students will still be fed.

“If that can’t be opened, we’re gonna have to bring lunch outside and serve it at a different area. We could still get students at the cafeteria, it’s just where we serve the food that we’re gonna have to look at as an alternative should the kitchen still not be fixed,” he says.