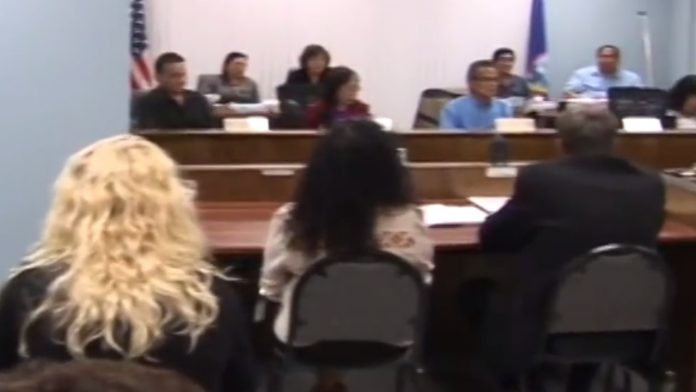 Frances Arriola won her case at the Civil Service Commission and the Superior Court, but must still wait until the Supreme Court decides on her case.

Guam – She may have won her case at the Civil Service Commission and at the Superior Court, but former Port Authority employee Frances Arriola will not be able to return to work just yet. Judge James Canto says he will not make a move on enforcing her reinstatement until an appeal at the Supreme Court level is finalized.

Attorneys litigating the case were back in court today in the case of Frances Arriola, who was fired from the Port Authority along with six others back in December of 2012.

Arriola was the first of the seven employees to win her case in Superior Court after she won on appeal at the Civil Service Commission. But because Port Authority Attorney Mike Phillips is appealing the Superior Court’s decision at the Supreme Court, the question of whether or not Arriola could immediately return to work or receive back pay was brought up.

While Arriola’s attorney, Daniel Somerfleck, disagreed with an automatic stay on Arriola’s reinstatement and awarding of back pay and attorney’s fees, he acknowledged that it appears to be controlling law. Phillips meanwhile argued that no action should be taken until all appeals have been exhausted.

“Our argument was when you read all the laws together, it really would be awkward to be, for example, if an employee prevailed at the commission level, to then pay them their back salary but when they lose at the trial court level here they owe that money back and then if they go to the supreme court, they might get it back,” explained Phillips.

In court, Phillips likened it to a game of baseball. Just because one team is leading at the 6th inning, does not mean they’ve already won the game, he points out. However, Attorney Somerfleck believes that the right to award, at least attorney’s fees, belongs to the Civil Service Commission, whether or not the employee loses in Superior Court or Supreme Court.

“Attorney Somerfleck, to his credit, he cited one provision that he believes is controlling that says everything is stayed. I think when you read both sides together it makes it pretty clear and so I don’t think there was much for the judge to consider today other than to say in essence the employee will not return, there’s no attorney’s fees, no back pay and we’ll see what the Supreme Court does,” Phillips says.

Phillips clarified that while Arriola may not be able to return to work, the position she occupied will not be filled in the meantime.

Arriola was one of seven employees who were fired from the Port Authority for allegedly participating in fraud by falsifying worker’s compensation documents for Bernadette Sterne Meno, who was a marketing manager for the Port Authority of Guam.

Another employee, Jose Guevara also won his case in Superior Court. He’s still waiting for his evidentiary hearing on back pay which has been scheduled for August 14 at 9 am.