Today was officially the end of the summer, but the start of a new school year for many.

With their bags packed with new supplies and freshly pressed uniforms on their backs, thousands of students got ready for their first day of school year 2019-2020.

Jon Fernandez, the superintendent of the Guam Department of Education, says that the first day of classes seemed to go well as he made his rounds to several schools around the island.

He says that while the first day did go well, there’s still some work left to do for a few of the schools, such as the ongoing canopy construction at the Agueda Johnston Middle and LBJ Elementary School.

“We encountered some of those delays, but over the past week, we’ve been trying to get as much of the work done and then make sure that we prepare for the start of school so that if work continues, we can ensure that there’s safe passage for the students,” Fernandez said.

According to Okkodo Principal Begoña Flores, the first day went pretty well for the campus of several thousand students.

“I’m very happy because a lot of people – even I, myself – I expected that it’ll be chaotic. We have new people, the 9th graders. They don’t know where to go, but we had the orientation and it’s good. For a first day, this is a very smooth opening,” Flores said. 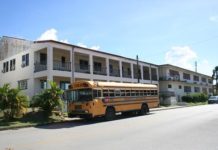