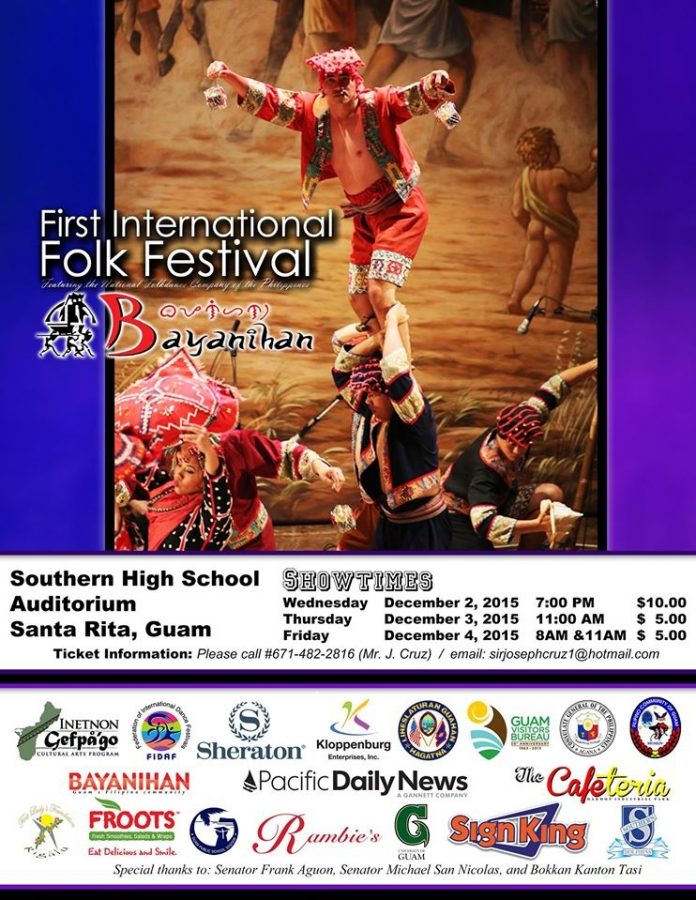 Guam – The first annual International Folk Dance Festival is being held on Guam next week Wednesday December 2nd at the Southern High auditorium.

The folk dance festival which is being held by Inetnon Gef Pago will feature dances from the local award winning cultural dance group as well as special performances by Bayanihan an award winning national folk dance company from the Philippines.

So what is folk dance? Inetnon Gef Pago Executive Director Vince Reyes say folk dancing features the dances of the people or folk of a particular region. The first International Folk Dance Festival will also feature highschoolers in their Southern’s Got Talent program. This program was started last year in response to the many viral videos involving high school fights. The idea was to create a positive outlet for the island’s youth. Inetnon Gef Pago Bayanihan and the Southern’s Got Talent kids will perform on Thursday and Friday but on Wednesday the island will get to see Inetnon Gef Pago and Bayanihan.

“We wanted to show not just again the expressions of our kids but also to share our own culture and show that our culture and the Philippine culture that there is this commonality but at the same time this unique and distinct heritage that belongs to all of us and I think that everyone should go because I think that would be a very inspiring show. Many people would have that opportunity to see what we see. Inetnon Gef Pago always travels to these different places and competes and now we’re finally being able to bring that world to Guam. So I encourage everyone to come out. It’s going to be an amazing show. Bayanihan is an amazing world class group and we are just so grateful and blessed that they are here. So come out, I think it’s just going to be a wonderful way to empower our kids as well as to show support for our island culture,” said Reyes.

Tickets are ten dollars a piece you can purchase them at the door on Wednesday Night at the Southern High auditorium. The show begins at 7p.m.