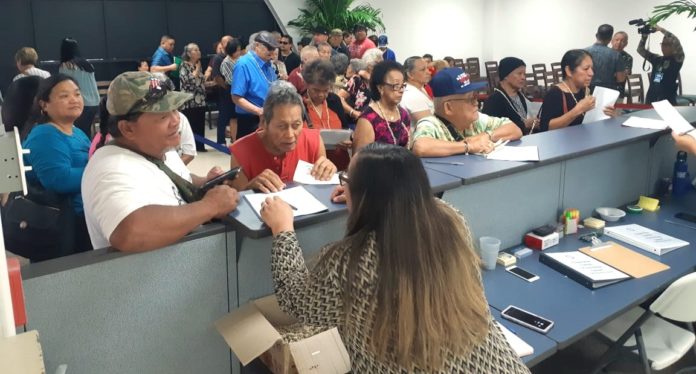 The governor’s office has issued invitations to the media and others to attend a presentation to honor war survivors today during which administration officials say the first war reparation checks will be presented.

The ceremony is scheduled to take place at 12:30 this afternoon in the large conference room at Adelup.

Press Secretary Krystal Paco said only a limited number of checks would be issued, less than 20.

The recipients have all been notified and most should be in attendance, she said. She declined to say the exact number of checks or the amounts. The names of the first recipients will be announced during the ceremony.

Meanwhile, in related news, Speaker Tina Muna Barnes has launched a petition drive in an effort to convince the U.S. Congress to reopen the filing period for war claims.

She says many survivors settled in the states and missed the narrow one-year claim period which ended in June 2018.

In response, Congressman Michael San Nicolas issued a statement saying: “It wouldn’t make any sense to repeat any of this over again. The local government should establish a local process for new claimants and filers using the same funding source.”

The Guam Bar Association today also announced that they will provide free legal services to families of deceased claimants who are in need of probate assistance after receiving letters of acknowledgment or decision letters from the Foreign Claims Settlement Commission.

GBA would be on hand at the claims processing center in Tamuning starting tomorrow morning from 9 until 11 a.m.