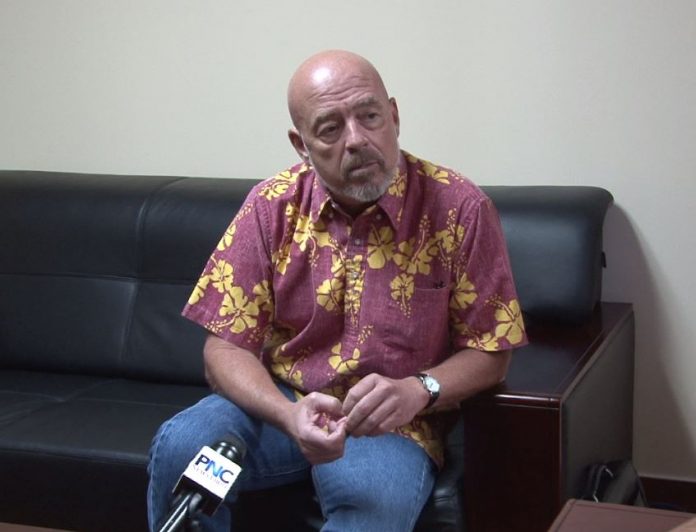 Guam – For the past year, there have been talks of the Russians influencing the U.S. elections. Here on Guam, alleged improprieties within either the attorney general’s office or GPD have supposedly succeeded in influencing the gubernatorial race.

“It’s got some rotten apples in that prosecution division that have to be dealt with.” Tom Fisher, Attorney for lt. Gov. Ray Tenorio

Just days before the election, pictures claiming to be the mugshot of lt. governor Ray Tenorio appeared on social media. These photos were allegedly taken while the lt. governor was being processed for the infamous gun-grab incident. While the LT. Governor was charged, he was not arrested, and therefore the Department of Corrections does not have any mugshots of Tenorio. So where did these pictures come from and why were they circulating?

Calling it “entirely improper” and “an outrage” Fisher states that “somebody within the AG’s office, or somebody within the Guam Police Department, was attempting and frankly succeeded, in influencing the outcome of the election. That’s just my thoughts on it.”

The attorney tells PNC that a picture speaks a thousand words – the perpetrator intended to, and succeeded, to convince the court of public opinion, that the LT was guilty even before his day in court and ultimately costing him the election.

Fisher adds that “many people, (when) they look at a picture and they assume oh, well the guy must be guilty because look his picture it is in the newspaper.” The Gubernatorial candidate was unsuccessful in his bid for the highest office on island. Tenorio lost to Lou Leon Guerrero by 8,663 votes.  Based on that, Fisher states that “I’m positive, that the person who leaked this, whether that’s the attorney general’s office or GPD, they succeeded.”

So who is to blame? According to Fisher, there is a prosecutor with an agenda, that prevents the prosecutor from giving his client the impartial due process that’s afforded to all citizens by law. It is unfortunately he adds, “that we are confronted with a prosecutor, who also had an agenda and that was to see Ray not do well in the general election.”

Fisher alleges that the attorney general’s office, not Attorney General Elizabeth Barrett-Anderson, but Jim McDonald, and James Collins, brought these charges at that time, and could have easily avoided it until the outcome of the general election. McDonald and Collins chose to drop it with 58 days prior to the election.

In addition to the leaks of the alleged mugshots, Fisher adds that there other incidents where there may have been some fishy business. When Tenorio took his picture at the probation office, he was told he was good to go. 24 hours after being processed, they were informed that the process needed to be repeated. “Something happened within those 24 hours, it’s not clear, but there’s a strong indication, there’s some indication that these leaks, I am confident some of the leaks, in this case have come from the AG’s office. I have heard that from 3 different sources, I have reported that to Barrett- Anderson, people were aware of the charges before they were even filed and these photographs, without a question were leaked. So somebody was pursuing their own agenda.”

While the lt governor had his day in the court of public opinion this past Tuesday, his attorney is confident to ensure that the outcome in the court of law, will be different than that at the polls.

Based on the “vanishingly small evidence” that was presented to Fisher during the discovery process, Fisher adds that “It’s extraordinary that they brought charges based on what I’ve seen and what actually happened and that is one of the reasons that I feel that this is outrageous and I can’t imagine any other reasonable prosecutor bring charges based on what they had.”

Going forward, Fisher intends to hasten the acquittal in this case for his client.