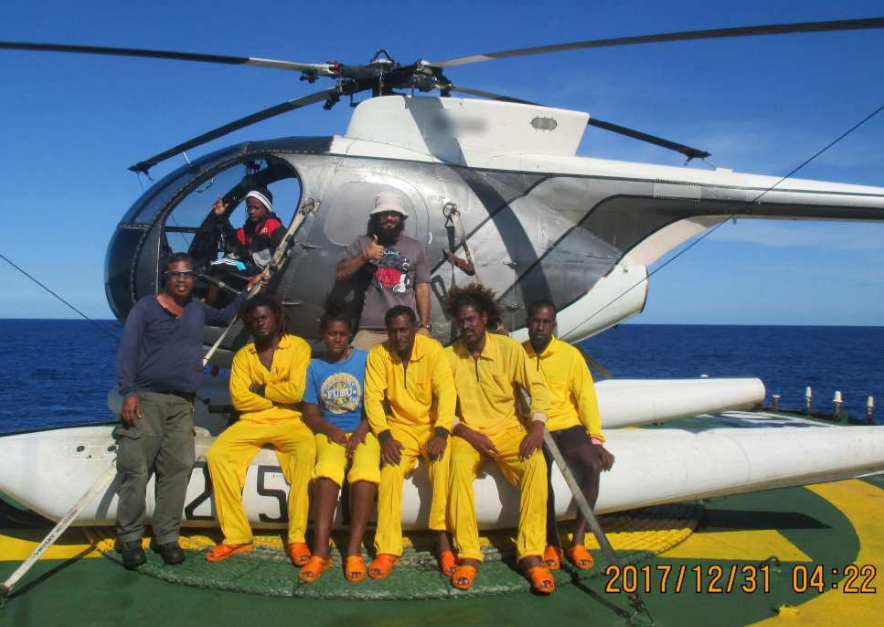 The family was adrift at sea for 15 days, surviving on nothing but collected rainwater and a speared shark for food.

Guam – When Isaac Harrison flew out to sea last Thursday, he was on the lookout for a school of tuna, but what he found instead was a lot more than he bargained for.

Harrison is a helicopter pilot for a tuna fishery aboard the Atun Planti. Chief Pilot Rufus Crowe says the helicopters are leased from Hansen Helicopters.

For Harrison, what began as just another routine fishing expedition suddenly turned into a rescue mission. But what initially caught Harrison’s eye was something a little unexpected.

He writes in a subsequent report: “Believe it or not, I saw a rainbow and since we weren’t finding anything on our current heading, and since I could see where the rainbow entered the water, I figured I’d head over.”

The rainbow led the pilot directly to what initially looked like a small, white piece of trash. But as the helicopter flew closer, the white object turned out to be a 20 foot fiberglass boat instead.

“I figured I might as well check it out and once I got closer, people started waving their arms and clothing and I [thought] oh my God it’s like a movie or something!” Harrison shared in an interview with PNC. “This actually happens in real life?”

The boat appeared to be drifting with no oars and no motor –a clear sign that something was wrong.

“They had emptied out the entire boat, including the motor because they had run out of fuel initially. They were going from one island to the next fishing. And they ran out of fuel and got caught in a storm,” Harrison said.

The pilot counted six individuals on board –one of the passengers was a child.

“It was a family. It was a father, his brother, and his children. The little boy is his [grandson]. The woman was his aunt. It’s basically three generations of people,” he shared.

With sunset about an hour away from departure, Harrison hastily decided to drop a radio buoy to the stranded fishermen.

“We don’t usually drop a radio buoy, but there were storms all around us, waves were getting bigger. So, I knew that if we didn’t drop the radio buoy, we would not find them again,” Harrison shared.

The decision was a lifesaving one. All six individuals were subsequently rescued.

Harrison says the desperate family survived for a total of 15 days on nothing save for collected rainwater and a shark that they were lucky enough to catch.

Crowe says rescues are not uncommon, but this one was definitely a little different.

“This happens probably three or four times a year, actually. This was a little bit more remarkable because it was the time of day and everything and they had already been out there for 15 days and [in addition] there was a six year old kid,” Crowe said.

As for Harrison, he tells PNC that with his first rescue mission under his belt, he’s definitely not averse to chasing rainbows again in the near future.

“Maybe there was more meaning to it than just flying around [that day],” he said.