Guam – “We need to keep their memory going.”

That is the reason former Lt. Governor Frank Flores Blas, his family, and relatives gathered in what is now officially known as the Manuel B. and Maria LG Flores Rotunda of the Guam Community College Learning Resource Center this morning, to honor the memory of his maternal grandparents, the late Manuel B. and Maria L.G. Flores (familian Undi).

“Very often we forget where our assets come from,” said Blas. He called the donation to GCC in his grandparents’ name a way to say thank you to them for what they left for their heirs. The former lieutenant governor noted that it was nostalgic to be at GCC, because his first cousin Tomas Flores is a GCC graduate, as is another cousin, Guam Police Officer III Barry Flores, as well as several other grand- and great-grandchildren in the family.

GCC President Dr. Mary Okada told the Flores/Blas family that today marks the continuation of a wonderful relationship the family has established with GCC. “Naming opportunities such as this morning’s ceremony to dedicate the Manuel B. and Maria L.G. Flores Rotunda of our Learning Resource Center illustrate your belief in our mission, and for that, we are honored and grateful,” she said.

Lorraine Okada, GCC Foundation Board chair, thanked the family for recognizing the substantial improvements that have taken place at GCC over the past several years. “It is it because of donors like yourselves that GCC is able to accomplish so much,” Okada said. 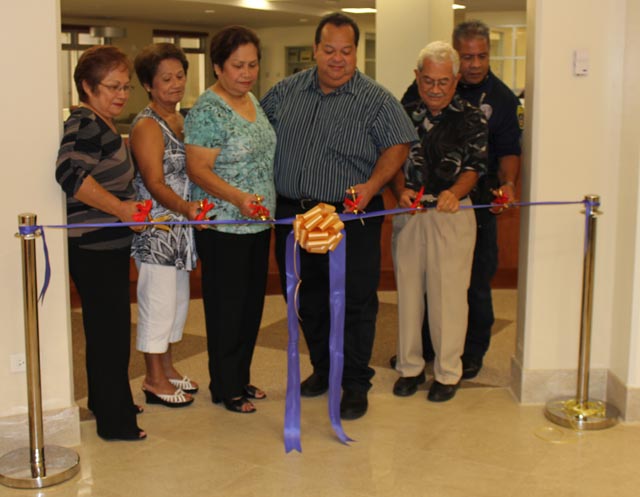