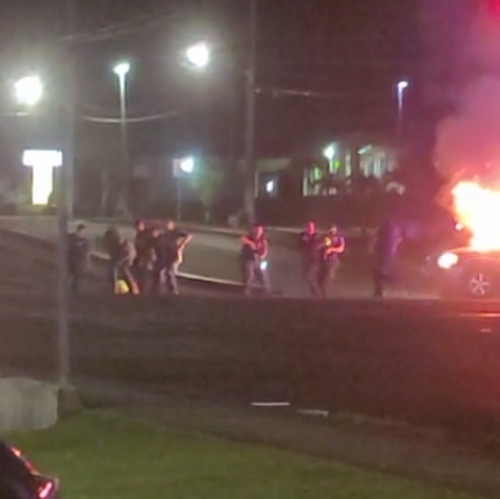 An officer-involved shooting happened earlier this morning, which resulted in the death of a member of the public.

Viral footage is circulating through various social media platforms, such as Whatsapp, depicting a man brandishing, what appears to be an assault rifle and having a stand-off with Officers of the Guam Police Department.

Sources suggest that the incident happened between 4 am and 4:30 am.

In response, the Office of the Attorney General issued a statement that the Independent Investigative Team was activated around 4:15 AM to continue the investigation.

Moreover, according to the latest information from the OAG, preliminary information and evidence gathered by the IIT indicated that GPD officers responded to a disturbance call at a residence where the suspect fled in his car before responding officers arrived.

The OAG reports that GPD later encountered and identified the vehicle and gave pursuit, which ended at the Harmon Loop intersection. The report further stated that the individual exited the vehicle with what appeared to be a firearm and that the vehicle caught on fire.

The OAG further reports that a GPD officer discharged his service firearm, hitting the individual. The male, according to the OAG was pronounced dead at 4:23 am at the Guam Regional Medical Center.

The OAG reports that the IIT is working with the Guam Fire Department to find out the cause of the vehicle fire.

According to a statement from GPD, Acting Chief of Police, Major Manuel Chong, has confirmed that the Internal Affairs Investigation was initiated on the officer who was involved and that the officer is placed on Administrative Leave.

The story is developing.