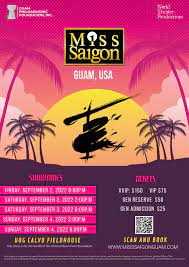 The Guam Philharmonic Foundation, in association with World Theater Productions, is ramping up to present Miss Saigon Guam, following a two-year delay due to the COVID-19 pandemic.

Miss Saigon, a story of tragic love, resonates with people worldwide, so much so that it has garnered performers from around the world to participate in Guam’s local production. In addition to the love for the musical being a common thread among others, Guam is fittingly woven into the production, as the island played a significant role during and after the Vietnam conflict.

Last Friday, PNC had the chance to meet some of the cast members at the Miss Saigon press conference, among whom have an extensive reputation in performing arts. Present cast members included the following: Ethan Le Phong, who plays Thuy; Garret Bolden, Jr., playing John, Aris Arthur Uy, playing the engineer; and Kleriza Versario and Cara Gutierrez, sharing the role of Kim.

When asked about any personal connections the performers might have to their characters, Ethan Le Phong spoke about what it means to be the first Vietnamese descent cast member of the Miss Saigon franchise. Moreover, he talked about how he and his family’s journey from Vietnam and eventually to America allowed him to pursue his dreams in the arts.

Le Phong said, “What relates to me is cause of how the show was originally produced by this photo that they saw, how this mother was giving her child at the airport— and it related to my family— my family escaped from Vietnam back in 1978, we were considered boat people. We were actually heading to the Philippines, but my boat—our motor broke. So, we ended up drifting in the ocean for over 30 days and ended up in Macao.”

He added further that it is essential to tell Vietnamese stories to foster representation.

Garret Bolden Jr. also shared his emotional ties to his character, gathering his role being about reunification, saying, “There’s this part in the story that he is helping people to reunite with their parents or dad. I myself am a GI baby. I didn’t meet my dad—I only met him when I was 18 years old, and that was through music.”

in addition Garret Bolden Jr. said, “I always feel like I’m somehow Tam and John is somehow my dad.”

Miss Saigon Guam is set to premiere on September 2-4 at the University of Guam Calvo Field House. For more details, visit www.MissSaigonGuam.com.