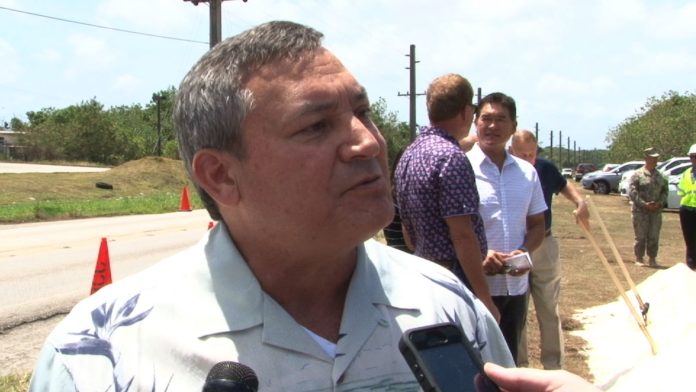 Guam – Governor Eddie Calvo says GovGuam is not out of the fiscal crisis woods just yet as payroll will still be difficult to make in the next couple of months. Because of this he is opposed to anything that repeals or exempts taxes and he’s keeping his current cost cutting measures intact.

Senator Mike San Nicolas has introduced a bill to repeal the recently signed bill 248 that will raise the business privilege tax by 1% beginning on April 1st until September 30th and create a 2% sales tax beginning on October 1st. Senators Regine Biscoe Lee and Fernando Estevez have introduced bills that exempt necessities from the sales tax. GovGuam was projecting a $67 million-dollar shortfall in revenues due to the Trump tax cuts. Bill 248 was passed and signed into law to provide roughly $30 million dollars for this fiscal year.  The governor is adamant that this fiscal crisis is a real crisis that needs to be addressed with some form of additional funding.

“If they are to introduce legislation that will take out funding that as far as I’m concerned equalizes what was taken from the government as a result of tax cuts then they have got to find substitutes. And it’s something that its important this is not about campaigning it’s not about politics I’m not running anymore,” said Governor Calvo.

The governor says this is about avoiding furloughs, payless paydays, and the closing or shutting down of GovGuam services. The governor says that even with the passage and signage of the tax bill making payroll for the next few pay periods will still be difficult.

“The cashflow even now with the new tax revenues that will come as a result of the increase of the BPT we don’t see the actual revenues coming in until May 20th. So, for the next couple of months it’s gonna be hairy,” said Governor Calvo.

This is why Governor Calvo says he is continuing his cost containing measures and will be submitting his fiscal realignment plan Friday. This plan is essentially $30 million dollars in cuts without cutting more than the initial $12 million cut for GDOE. GDOE was supposed to cut $19 million which would have required the furloughing of employees and the closure of some schools.

“What we’re sending over to the legislature ensures that education is not further hit but then all of the other agencies will have to sacrifice,” said Governor Calvo.

As for furloughs the governor says, “The process still has to continue. And as you all know the furlough process in GovGuam there is a lot that needs to be done in order for us even to move forward and it takes again there is a 90 day notice so we need to continue to move and do our due diligence in terms of moving forward with the furlough process as well as other cost cutting measures.”

“I think last week we had maybe two plus million dollars. One of the things that was evident when I came in as governor. When I came in there was a three hundred and thirty million dollar accumulated deficit. And why everything else was still going on and the government was still operating was because they did not pay tax refunds. The majority of that accumulated deficit was tax refunds owed to the people of Guam,” said Governor Calvo.

The governor says this is why he is committed to continue making tax refund payments as soon as the money is available.