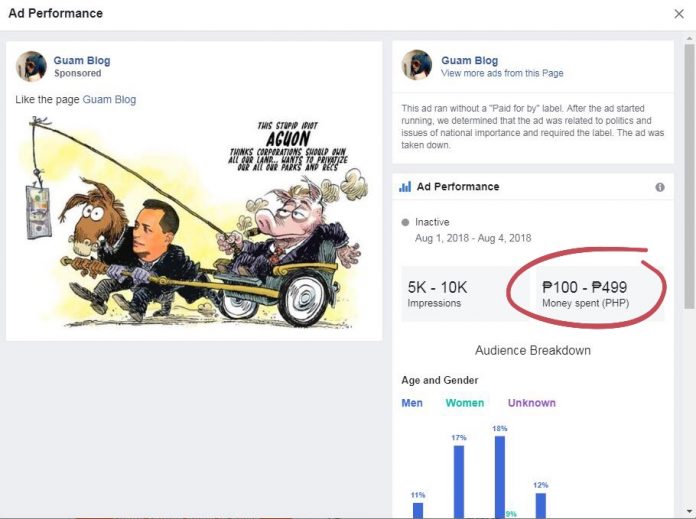 Guam – A series of negative viral campaign videos and ads has now opened a Pandora’s box of election season deceits. The implications are so flagrant that federal authorities are now looking into the foreign meddling of Guam’s elections.

A reliable PNC source says federal agencies are now engaged and looking into the conspiracy that some gubernatorial campaigns have utilized troll farms out of the Philippines to interfere and influence the outcome of Guam’s elections.

This appears to be the same method used the 2016 U.S. Presidential elections allegedly by the Russian government.

How do these troll farms work? It’s not as simple as creating a fake Facebook account and blitzing pages with comments, likes or even sharing negative memes and attack ads. Anyone can do that. These troll farms are much more sophisticated and organized.

Many of these troll farms will create multiple fake accounts under different names while using similar profile pictures. They are so similar in their likes, shares and follows that the only thing separating them is the name of each account. These different accounts will then post similar pictures or statuses at similar times. The kicker–while many of the accounts claim to be from Guam, some have similar versions—counterparts if you will—claiming to be located in the Philippines.

PNC was able to uncover multiple accounts that appear to be fake or, at the very least, automated. And all of them focusing largely on a single topic: Guam elections.

So what’s the big deal? People run sponsored ads all the time, right? Sure. But at least two of the ads—the ones promoting Rodriguez-Cruz—were paid for using foreign currency—the Philippine peso. These two ads show that between 500 to 999 pesos was spent on each ad which converts to between $9 to $20 U.S. dollars each.

Another Facebook account titled “realchange2018” shared a video on August 24. The poster of this video indicated they were at Gun Beach in Tumon. But the Facebook geotag shows it was actually posted from Taguig, Philippines.

And yet another Facebook account under the name “Guam Blog” ran attack ads against Aguon-Limtiaco and one ad supporting Tenorio-Ada. Some of these ads were also paid for with foreign currency.

Independently, these accounts can arguably stand on their own, perhaps created by multiple people. But there is one account that appears to link most of them together: Breyalex Technologies. Most of these Facebook accounts follow local pages as well as other questionable accounts. But Breyalex is the one account that stands out from the rest.

On its Facebook page, Breyalex advertises itself as “IT expert specialists in Online Reputation Management with a long track record – No risk to you.”

It lists its location as Parañaque in Philippines with a Philippine phone number attached.