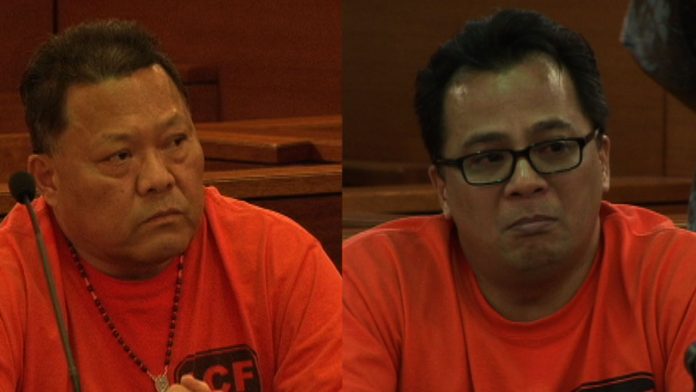 Anthony Quenga and David Manila were convicted of promoting prostitution in the Blue House prostitution ring.

Guam – Two former police officers are looking to serve less time in prison for the Blue House prostitution ring they were convicted of in September 2013.

Anthony Quenga was sentenced to 30 years for promoting prostitution, criminal sexual conduct, and conspiracy, but appealed his convictions based on claimed defects in the indictment. The Supreme Court sent the cases back to the lower courts for re-sentencing, which was scheduled for today.

Instead, arguments were made on a motion for correction and reduction of sentence regarding the Human Trafficking Act established in 2009. Quenga’s attorney, Sylvia Stake, argued that the statute cannot be applied retroactively since Quenga was charged in 2010, and the statute of limitations had been exceeded. But Assistant Atty. Gen. Jonathan Quan disputed Stake’s argument, saying the Human Trafficking Act is not preclusive. Quan adds that if Quenga can be charged with criminal sexual conduct, he can be charged for human trafficking as well.

Judge Anita Sukola is taking the motion under advisement, and will issue her decision at a continued sentencing hearing on April 12.

Meanwhile, David Manila, through his legal counsel Terence Timblin, filed a motion for correction and reduction of sentence, asking the court to ignore the statutory minimum and shorten his sentence from 30 years down to time served. The prosecution filed an opposition yesterday, but Timblin said he did not receive it and would need time to review the documents.

A continued hearing on the matter is set for April 7.