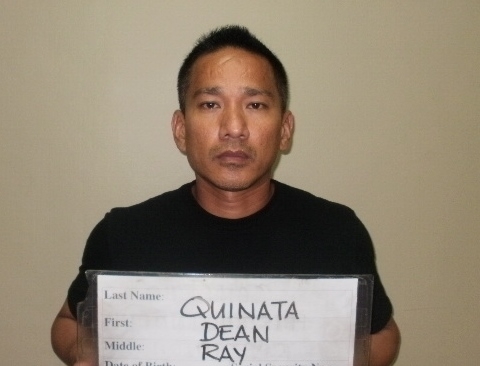 While Dean Ray Quinata’s local court trial is underway, he’s also fighting another case in federal court in which DEA agents seized large sums of cash from his property.

Guam – The rape trial of former firefighter Dean Ray Quinata continued today during which a criminologist testified about the rape kit she tested. Meanwhile, Quinata is also fighting another case in federal court in which DEA agents seized over a $150,000 in cash from his house and his pickup truck.

Dean Ray Quinata, 41, was in Superior Court today for his trial in which he faces first degree criminal sexual conduct charges dating back to May 2012 for allegedly raping an 11-year-old girl.

The former firefighter denies the allegations that he sexually molested the victim, undressed her and then raped her for an hour.

On the stand today was a criminologist Zenodia Lynn with the Guam Police Department who conducted a forensic test on a rape kit she received that was collected from the victim and the crime scene.

Lynn testified that all the items that were tested for semen—the victim’s underwear, shorts, t-shirt, and some bedding—tested negative for the presence of semen or blood. But Lynn testified that it is not unusual for there to be a lack of semen in rape test kits.

She noted that there are a number of reasons why semen can’t be traced, including the use of protection and, as defense attorney Curtis Van De Veld pointed out, no sexual contact at all.

What was found in the evidence sent to her were hairs. The hair samples, along with Quinata’s DNA, were then sent to the FBI for forensic analysis. However, Lynn says the FBI denied GPD’s request to test the samples on grounds that since the hair collected came from the defendant’s own home, the evidence would be probative, in other words that there would be an obvious match.

Meanwhile, in another case, this time in federal court, Quinata is fighting a claim against his property made by the federal government. Last September DEA agents executed a criminal search warrant seizing a number of items from Quinata’s Talofofo residence, including over $150,000 in cash, a Toyota Tacoma and 11 watches. Court papers state that the items were linked to illegal drugs.

About two months later, Quinata filed a counterclaim against the federal government. Quinata, in court papers, says the cash, the car and the watches were all obtained through legal means.

The US Attorney’s Office was given until May 15 to either obtain a federal indictment or complaint for forfeiture against Quinata, otherwise, the items seized may have to be returned to Quinata.

Quinata’s rape trial in Superior Court will continue tomorrow. For the federal case, you can read the court documents by clicking on the file below.