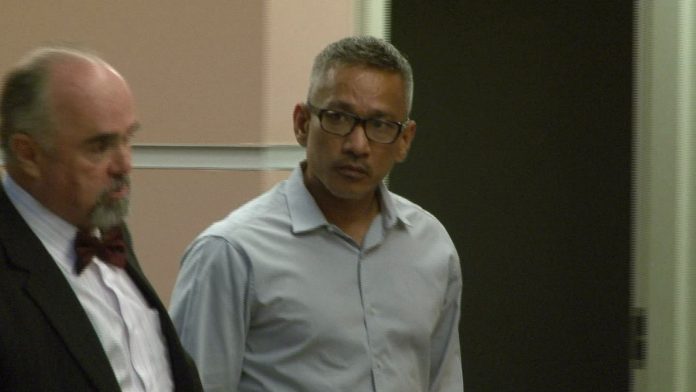 Dean Ray Quinata’s attorney, Curtis Van De Veld, filed a motion for mistrial, arguing that the prosecution failed to inform the defense that the victim’s testimony had significantly changed.

Guam – The rape trial of former firefighter Dean Ray Quinata is on hold as Judge Vern Perez entertains a motion for mistrial.

Defense attorney Curtis Van De Veld is slamming the prosecution for failing to disclose pertinent information prior to the start of trial.

The issue involves the testimony of the 11-year-old victim. Back in 2012 when the alleged rape was first reported, and in subsequent interviews with authorities thereafter, the minor said that it happened one evening during a sleepover at Dean Ray Quinata’s residence around 1 am and that it lasted for one hour.

However, the victim’s story changed when she testified during trial. The prosecution knew this, says Quinata’s defense attorney Curtis Van De Veld, yet failed to disclose this information with the defense; information that would have helped the defense better prepare for cross examination of the victim-witness.

What had changed? Van De Veld says based on statements the victim provided to Prosecutor Nicole Driscoll, the time of the alleged rape changed by a couple of hours to 3 am. It also went from lasting one hour to just 25 minutes; and finally, Van De Veld points out, there apparently was no penetration.

Further, Van De Veld noted, the young girl revealed that she never actually saw Quinata on top of her because she had her eyes closed the entire time. Van De Veld says the victim claims she only knew it was Quinata because of the sound of his voice.

This sudden change in the timeline, Van De Veld argues, is a ploy by the prosecution to “destroy Quinata’s alibi.” Van De Veld slammed Prosecutor Driscoll, calling her actions “disgusting,” when she deliberately failed to disclose those new details.

Van De Veld also argues that the only explanation the prosecution could give was that they had intended to provide the new statement right away, but just failed to do so.

Judge Vern Perez put the trial on hold in order to address Van De Veld’s motion to dismiss for mistrial.

Other motions were also filed, including one from the prosecution to add new expert witnesses to testify.

A continued trial date was not provided.