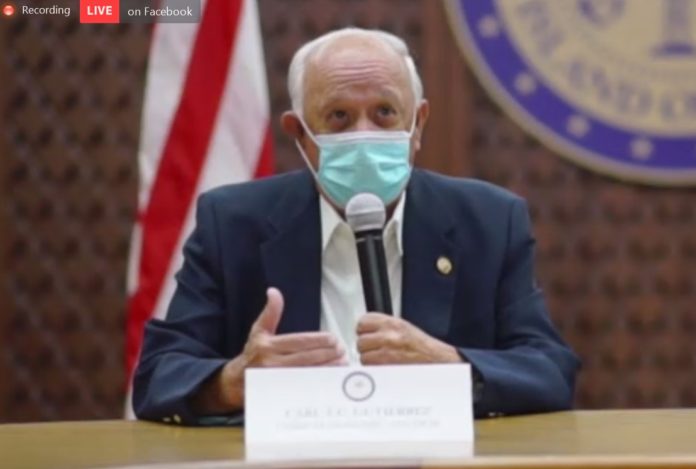 Former Governor Carl Gutierrez will serve as the interim president of the Guam Visitor’s Bureau after Pilar Laguana formally steps down as GVB President and CEO on May 30th.

The GVB Board this afternoon approved the recommendation to appoint Gutierrez that was made by Laguana herself.

In her report to the Board Laguana said that following consultation with the Governor,  the GVB Search Committee “agreed with her recommendation to have former Governor Carl Gutierrez as the Interim President for up to 90 days until a new and permanent President can be vetted, selected, and approved.”

Laguana also gave the Board an optimistic outlook about the potential for the recovery of the island’s tourism industry,

“Guam’s adherence to the Governor’s Executive Orders and emergency measures seems to have paid off,” she said. “I can say there is mounting activity and cautious optimism for our tourism industry as the airport, hotels, restaurants, and retailers are establishing or have established new operating procedures of safety to minimize exposure to Covid-19..”

“If all goes well we could see Guam in PCOR 3 and ready for the gradual start to welcoming visitors to the island once again,” said Laguana.

During her Thursday afternoon online news conference, Gov. Lou Leon Guerrero formally announced the appointment with Gutierrez at her side.

“GVB must be guided through a rough period in its history. That is why I have asked former governor Carl Gutierrez to lead the GVB as interim president and CEO for 90 days as we look for new leadership and plan for the future of Guam,” the Governor said.

She added: “Governor Carl TC Gutierrez is no stranger to hard times whether it was the burst of the Asian economic bubble, the crash of the Korean Airlines plane or the aftermath of super typhoons. He understands the path from crisis to prosperity.”

Gutierrez said he welcomes the interim appointment. The goal, he said, is to revive the island’s number one industry — tourism.

“Because our job is to be able to try to rebuild the economy that has been lost now over the last two months. She (the Governor) needs to keep Guam safe. She needs to project to the world that Guam is safe and we need all of the participation of the general public. We must all come together to help instead of tearing each other down,” Gutierrez said.

Gutierrez will continue his work as the Governor’s Chief Advisor on Economic Development, National and International Affairs.