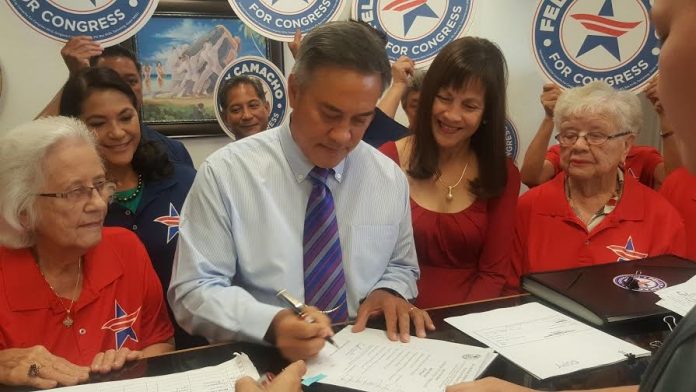 Camacho will be running against Margaret Metcalfe in the primary election.

Guam – Former two-term Governor of Guam Felix Camacho today filed for candidacy for a seat in the U.S. Congress.

Family, friends and supporters of Camacho gathered at the Guam Election Commission this afternoon as he signed and filed his candidate documents. Camacho says the reason why he decided to run for Congress is to bring reason, collaboration and cooperation to the Nation’s Capital for the betterment of the island. In his speech, Camacho says his goals include restoring accountability and transparency in the federal government, making sure that the federal tax dollars are spent more wisely, and encouraging economic growth on Guam.

“Since leaving office, I have stayed active as a businessman and a resident of this wonderful island. Even with so many promises for our island and her people, I hear frustration, disappointment, and apathy from people I’ve spoken to. Too many issues that matter to our people remain unresolved and many opportunities to gain parity for our island and with our fellow Americans have gone unaddressed. I decided to run to be Guam’s next delegate for Congress,” he states.

Camacho was the first to officially file for candidacy for the Guam Delegate to the U.S. House of Representatives. Camacho makes the 27th resident to file for candidacy. The rest are mayoral candidates. Camacho will be running against Margaret Metcalfe in the primary election.