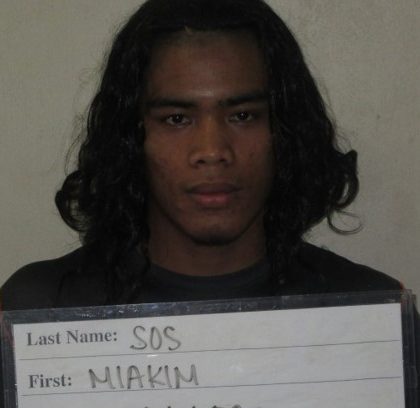 Police say during a foot chase of the suspect, they found three knives that fell out of his pocket.

Guam – A report of a disturbance at Kmart led to the arrest of Miakim Sos who reportedly assaulted two Kmart employees.

Sos was a former employee at Kmart in Tamuning and according to court documents, Sos allegedly followed two Kmart Employees without their knowledge to the “container area” of the Kmart parking lot. As the two were returning to the store they were informed by fellow co-workers that they were being followed by Sos.

When Sos was asked to leave the property, police say he began shouting in Chuukese, pulled out a knife and began to swing in attempts to cut the employees. When officers arrived, Sos had already fled the scene towards Triple J parking lot.

Officers gave chase on foot and reported that Sos dropped three knives during the pursuit before officers detained him.

Sos is charged with aggravated assault, possession or use of a deadly weapon in a felony, assault and reckless conduct.