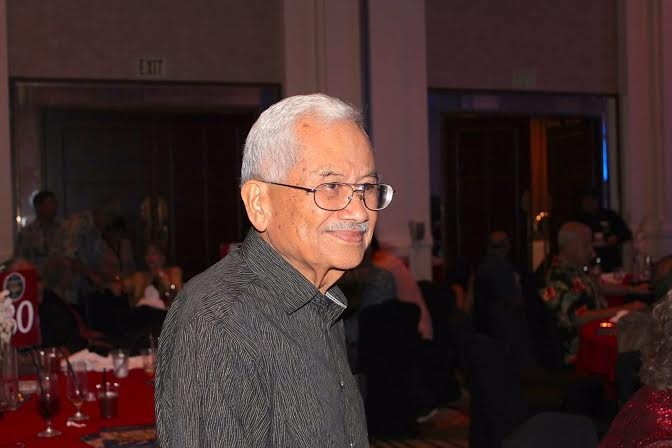 Many remembered Blas as a statesman from a bygone era.

“I know one thing for sure we lost a great friend a great leader a great communicator and a person that has so much passion in helping the people of Guam,” said former Governor Joseph Ada. Ada knew Frank Flores Blas well. Blas was his Lt. Governor for two terms and prior to that the two served together in the legislature. “He was a very effective Senator he was our majority leader he was able to move legislation good legislation that would help the people and his ability to work with both the Republican and Democrats and that’s a forte that’s very difficult to have,” said Ada.

Former Senator Marilyn Manibusan also served with Blas in the legislature and she holds him in high regard. “He has left behind footprints handprints it’s hard to follow because they were his. This was all about him and his brilliant mind and his heart so it’s going to be hard to follow his leadership excellence and I will miss him I will miss a good friend he’s Guam’s true advocate as far as leadershiop is concerned,” said Manibusan.

Manibusan and Ada both remember Blas as a man who cared deeply for the people of Guam and cared about what was best for Guam. Both Ada and Manibusan said Blas was an early supporter of self-determination and Ada said Blas felt the key to self-governance was having a strong economy. “He’s also very fiscally conservative he won’t want to see any abuses in financial matters but yet he has these ways of stretching the money,” said Ada.

Ada said that even when Blas engaged in political debate he did so in a civil manner and with decorum. “The Lt. Governor is an exceptional statesman he’s extroadinary he’s firm but I know he loves his people, loves his family, it’s a great loss for Guam he’s a good friend and he’s trustworthy,” said Blas.

Blas’ first cousin Dave Tydingco says the Lt. Governor was a man from a by-gone era. “He came from that era of statesmanship of respect and with honor I remember most distinctly he always wanted to do what was right and he felt deeply about taking care of our people and you saw it in the body of work,” said Tydingco.

Blas was the founder of the Make-A-Sish foundation, a local musician known for playing the saxaphone, a proponent of the people of Guam and most importantly a family man. “Last week we lost one of the folks that represented the best of the greatest generation,” said Blas.

Tydingco says that the Lt. Governor didn’t even want a state funeral and opted instead to welcome everyone to his family funeral.

Although he didn’t have a state funeral Blas did receive an official resolution from the Guam Legislature recognizing commemorating his accomplishments and his service to the island of Guam.