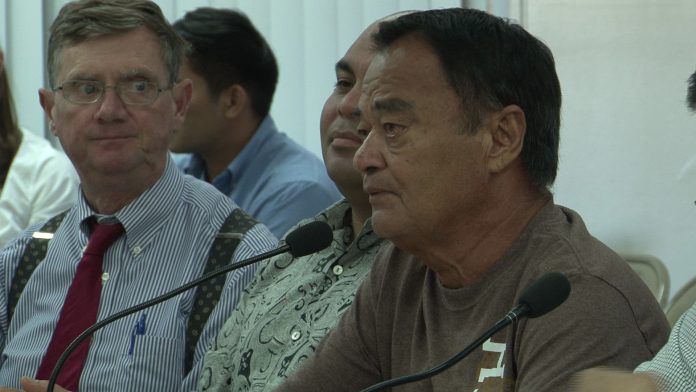 Guam – Former Barrigada Mayor Raymond Laguana testified in support of Vice Speaker BJ’s Cruz’s Bill 215 today which would give drug offenders who were convicted prior to 2005 the ability to have their cases expunged—saying that the bill would benefit someone like him, who’s been convicted of drug-related crimes in the past.

The bill says that the because the drug court and rehabilitation program at the Superior Court of Guam was not implemented until 2005, many drug offenders from previous years are still left with tainted records.

The Superior Court says that hundreds of individuals who have completed counseling and drug treatment prior to 2005 are eligible to have their cases expunged based on the current drug treatment program.

Mayor Laguana says he’s one of them. In addition to a drug record, the former mayor says he was also convicted of assault and battery.

“When I was just turned [sic] 18, I committed assault and battery. I was a gangster. I was part of the leader, beating up people in the streets,” he admitted, noting that he was sentenced to 30 days in jail. “When I got out I made up my mind that it’s not the right way. I hope that you guys understand that out of all the crimes I have only two. People get pardoned by the governor that [sic] has 15 crimes in their hands and worst crime than what I did,” he points out.

Vice Speaker Cruz says that he’s been approached by hundreds of individuals like Mayor Laguana over the last 10 years because they are unable to clear their records.

“So many of these individuals who have, at least for this bill, a drug offense and it’s their only offense that they’ve had and they’ve successfully completed the drug rehab program court, it was before 2005, they could not get it expunged. Consequently every time they try to go get a job  they can’t be hired,” notes Cruz.

“I tried to get a job the minute I passed everything but people were reluctant to take me because of the drug charges,” explains the former mayor. “Maybe this time they all will look at me because–nothing about drugs. I don’t know why, that ice now is too strong. But heroin was worse but people get to know the people who are taking it, getting a job. I don’t know what’s wrong with ice. Is it too cold or what?”

The Superior Court of Guam also testified in favor of Bill 215.