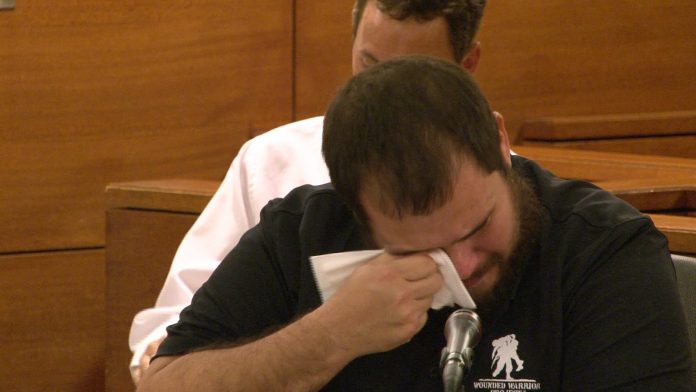 Guam – For the first time since his arrest last year, former police reservist and now convicted rapist James Esperon spoke in open court. It was at his sentencing hearing today where he tearfully expressed remorse asking for a lighter sentence, but the prosecution asked for a heavier punishment.

Esperon was convicted in June of first and second degree criminal sexual conduct in the rape of a 12-year-old girl known to him. While the victim was not present and declined to provide a victim impact statement, Esperon used his sentencing hearing as an opportunity to express remorse for his actions.

“I should have never had to remind myself that I’m a married man and took vows to honor and cherish the woman I married,” Esperon began. “I was so young and very stupid for reacting the way I did and it going as far as it did. It should have never happened. I did not realize at the that time what we had done, what the consequences of those actions would be. I am in no way blaming the victim or anybody else for my decision for I was an adult at the time of the incident and should have known better.”

He continued as he choked on tears: “I brought so much pain and embarrassment upon myself, my family, my friends and most especially to [the victim].”

Esperon added that he has received numerous commendations and accolades for his service in the US Army and that his family’s main source of income is the benefits he receives for combat related injuries. Esperon begged for leniency, expressing concern that his family could lose those benefits if he’s incarcerated.

His attorney Maria Fitzpatrick, also pointed out that her client had a clean record and is at low risk for re-offending.

“Even in his statement right there his first offense he believed was adultery. He broke his vow, but we’re not talking about adultery. This is massively more serious than adultery. This is a man taking advantage of a child,” Prosecutor Matthew Heibel quickly countered.

“The court will sentence the defendant [to be] incarcerated for a period of 15 years with credit for time served. He’ll be placed upon his release on five years parole,” announced Judge Michael Bordallo.

Meanwhile, Esperon is due back in court on Thursday for another hearing in a separate case in which he’s also accused of raping another victim.