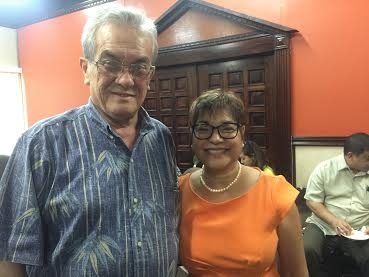 Guam – The Republic of the Marshall Islands has been down the self-determination road before so speaker Judi Won Pat held a roundtable meeting to pick the mind of Former RMI Foreign minister Tony DeBrum.

“Universal suffrage,” replied DeBrum who explained that much like Guam the RMI had been colonized by numerous world powers. “There really was not an animal a Marshallese citizen animal in anybody’s book it was always a subject of some other government. Until 1951 no one in the Marshalls had a birth certificate. I don’t have a birth certificate. So when the Trust Territory government declared eligibility for plebiscite voting and for the constitutional voting in the 70’s it simply said if you are a citizen of the trust territory living in the Marshall Islands you will be eligible to vote in the plebiscite. Same thing in the FSM, same thing in Palau and the Northern Marianas.”

The Marshall Islands ultimately picked free association with the U.S. Like the FSM and Palau the RMI has it’s own deal with the United States. It’s one that essentially allows the U.S. to use it’s land air and water for military purposes in return for defense of their small island nation and an ability for their citizens to travel freely to the U.S.

“In your experience has the Marshalls or any of the Freely Associated States of Micronesia been treated as an equal partner?” asked Leon Guerrero. “Yes we have,” replied DeBrum adding, “One vote at the U.N. and the United States sees us every year with a list of items that they would like for us to vote with them so in that sense we are equal. We have negotiations in the Pacific Forum and other UN organizations like the UNFCC for example.” DeBrum also spoke about what it was like when they first became a freely associated state. “Once free association kicked in and once we became members of the U.N. our international relationship was on a government to government basis. We have an embassy in Washington we have an ambassador,” said DeBrum.

However DeBrum made it clear that it would be up to Guam to decide which form of government or political status is the best fit for the island. Moreover DeBrum said if the Marshall Islands were to vote on their self-determination again they would be divided between the younger generation which prefers free association and the older generation who believes independence would’ve been the best route.

The Commission on Self-Determination is set to meet again in July. Governor Eddie Calvo has said he wants Guam to hold a self-determination vote or plebiscite that is open to all registered voters on Guam in this year’s general election in November.