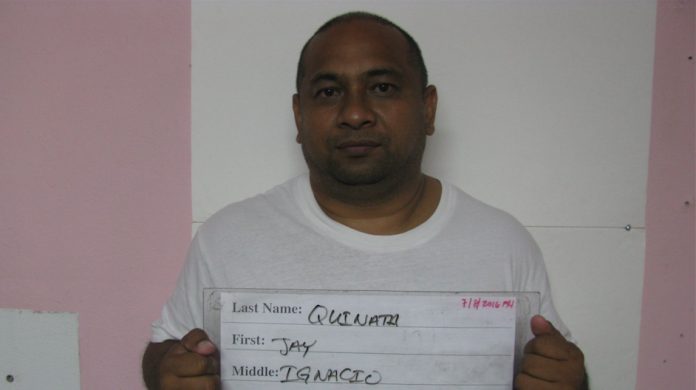 You can read the original UOG statement attached to the story.

Guam – Jay Quinata, a former UOG academic advisor and DOE teacher, is being accused of voyeurism. He was charged with invasion of privacy for allegedly filming minors showering and an unaware UOG student’s underwear.

A magistrates report shows that authorities were tipped off by Quinata’s former roommate, who told police that Quinata possessed a thumb drive that had video footage of two female minors known to Quinata in the bathroom. The minors were age 9 and 15. According to the report, video files obtained by police show Quinata placing a video camera beneath the sink in the bathroom, then a female minor walks in and begins to undress and shower. Additionally, police viewed another video file that appeared to be taken at a university of Guam classroom. According to police, the footage shows an upskirt shot of an unsuspecting woman. According to police, Quinata claimed ownership of the files to another individual but that the images were of girls from the Philippines. However, when questioned by police, Quinata denied having anything to do with the thumb drive. Quinata is charged with two counts of invasion of privacy as 3rd degree felonies. The University of Guam is launching an internal investigation into how Quinata was hired despite having previously been arrested. You can read the UOG statement attached to the story. Here is an updated statement from the University:

“The University has terminated the employment of Jay Ignacio Quinata for concerns of student safety effective immediately. Mr. Quinata was a temporary employee working as a tutor in the TRiO Programs. In addition, UOG will also investigate Mr. Quinata’s standing as a graduate student.

The University is conducting an internal investigation of Mr. Quinata’s employment and his activities to include an examination of his personnel records, and how he was hired. The court and police clearances he submitted did not show any record of court cases or convictions. We are also awaiting confirmation from the Guam Police Department regarding allegations that some of the video files were recorded at UOG.

The University is cooperating fully with the Guam Police Department in its criminal investigation and urges anyone with information regarding the case to contact GPD or the UOG Helpline at 735-HELP (4357).”