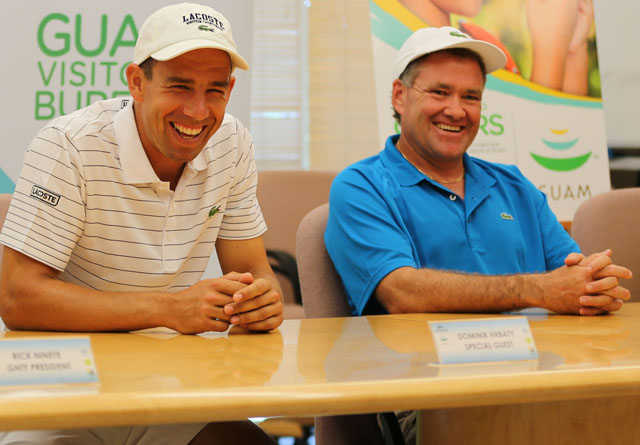 Guam – Former World No. 12 tennis player Dominik Hrbaty knows the powerful role he can play in the developmental years of young tennis players today, and has no qualms in doing what he can while in Guam for the island’s young and upcoming players.

Hrbaty, of the Slovak Republic, currently is in Guam for the 2013 Lacoste GVB Futures tennis tournament and shared an anecdote from his junior playing days during a press conference at the Guam Visitors Bureau conference room.

“One story from my life was when I was 16 – I played my juniors Roland Garros,” Hrbaty recalled. “I was already a pretty good player but I still had my heroes there, like Pete Sampras, Andre Agassi … I was just running like crazy around the stadium to get all their autographs.

“And then two years after … I suddenly was playing Sampras in the last 16 of the Australian Open and I almost beat him. This is something that you remember,” Hrbaty added.

Hrbaty played several tournaments and reached the Grand Slam stage in 1997, where in his Grand Slam debut, he reached the Round of 16 to face Sampras. Hrbaty forced Sampras into a five-setter, but lost to the eventual champion 7-6(4) 3-6 4-6 6-3 4-6 the ITF Web site states.

Hrbaty, who coaches more now than plays, is entered in the tournament, but also will be tracking the success of one of his students, Patrick Davidson from the United States. Through the week he is in Guam, Hrbaty will engage with the local community through tennis clinics, motivational talks and appearances at local businesses.

“I want to thank the Guam National Tennis Federation for going forward with the Futures again after one year off and also for giving me the opportunity to be the tournament director again,” Smith said. “I sit at this table, but there are so many others who do so much with all the organization and planning – it’s unbelievable how much has to be done. Thanks to all the volunteers, thanks to all the sponsors … it’s quite a big undertaking without the sponsors to support us.

“This is sports tourism at its best – originally, there were 134 entries from 34 different countries and the Sports Tourism Fund is helping Guam get that exposure,” Smith added.

Guam played host to its first Futures tournament in 2010. In the 2011 edition of the tournament, five young players earned their first-ever ATP ranking point by winning matches in Guam.

The 2013 tournament’s main draw begins 10 a.m. Monday. The tournament bracket will be determined after the completion of this weekend’s qualifying draw and will be posted at the Hilton Guam Resort & Spa tennis courts, as well as the tournament’s social media and Web sites. Fans can like the tournament on Facebook at facebook.com/GuamFutures or keep track of updates on Twitter by following @GuamFutures.