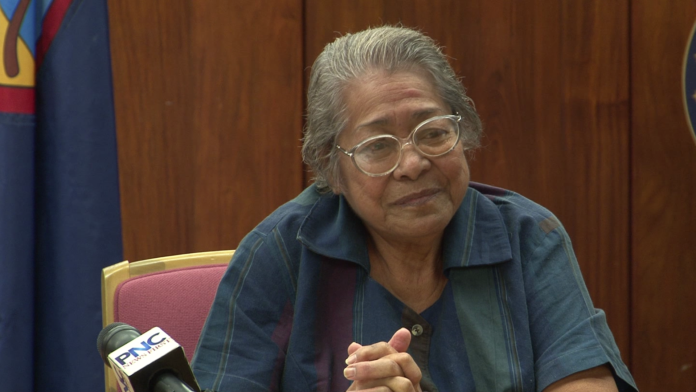 Guam – A foster mother was recognized this morning for her dedication to foster children during a proclamation signing at Adelup for Foster Care Month.

Her name is Rufina Tainatongo and she has been foster mother for nearly four decades.

Today, she talked about the countless children she’s taken into her home and helped to reunite with their biological parents. Tainatongo shared one of her earlier experiences as a foster parent and what she and her husband discussed when they opened their doors to Guam’s children.

“Then he came home he said, ‘Remember, you got yourself with these children. They’re not ours for real but you open your heart, I open mine too, we open the doors so they are ours now,'” recalled Tainatongo. “One thing he asked me and I keep that in my mind: Whenever you get angry at the children because they’re not good children I don’t want to hear you say these children are as bad as their parents.”

She added: “My goal for being a foster mother is to reunite the children with their biological parents. That I accomplished so many.”

Lt. Governor Ray Tenorio, who was on hand for the proclomation sisnging, commended the foster mother for her service.

“There’s no greater example than 38 years of being a foster parent than Mrs. Tainatongo. So if there’s a woman in this room who deserves foster mother of the year–if not of the millennium–it’s Mrs. Tainatongo, so thank you so much,” he said.

Tenorio also talked about his experience as a foster kid.

“People’s lives have been changed as a result, including mine as being a foster child, because I saw the dismal living conditions that I was in when I was a little boy, to compared to the foster family, it’s such a major difference and it’s just the caring, you don’t have to be a rich home,” said Tenorio.

Aguon also noted that as of this month, 203 foster youth are in need of safe homes.

If you would like to learn more about how to become a foster parent, you can contact GFFA at 488-7450 or email them at guamffa@gmail.com.